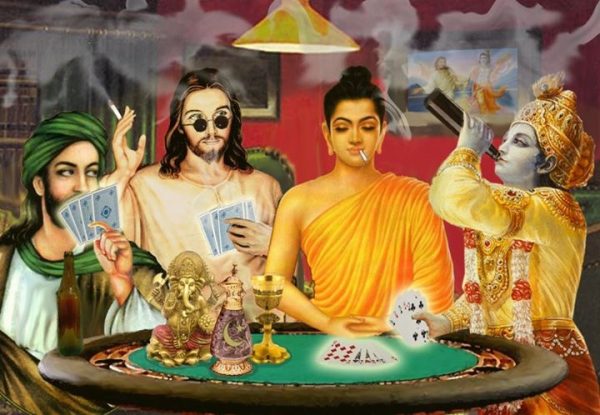 Like a lot of millennial kids growing up, I split holiday seasons/family time between households comprised of various familial units: moms, dads, parents’ significant others, step-parents, siblings, half-siblings, step-siblings, less formally recognized but not less important other-people’s-kids who were basically siblings for a time, assorted pets, etc. What is fractured to some is abundance to others, and anyway, that’s not what this post is about.

Though my mother is Jewish and father Buddhist, I also had parental figures from both Cuban Catholic and Irish Catholic backgrounds. Don’t let’s get started on the aunties and uncles – my tribe is legion. Perhaps more relevant than the specifics of inherited and absorbed spirituality, we all just generally didn’t need much of an excuse to engage in festivities – so, I grew up with a version of Christmas that was heavy on the Mas and mostly lacking the Christ. A modern-day multicultural Saturnalia. We ate, drank, and were merry, very often shouted and cried, and then ate some more.

The Grinch was a childhood favorite. This video came out in 2014 and went viral, so it might be old news for you. But for me, it just. doesn’t. get. old.

Merry, happy whatever it is you might have cause to celebrate! Even if (especially if) we’re all “a little messed up”.