Anti-War Veterans Call On National Guard to Stand Down

Source: In These Times 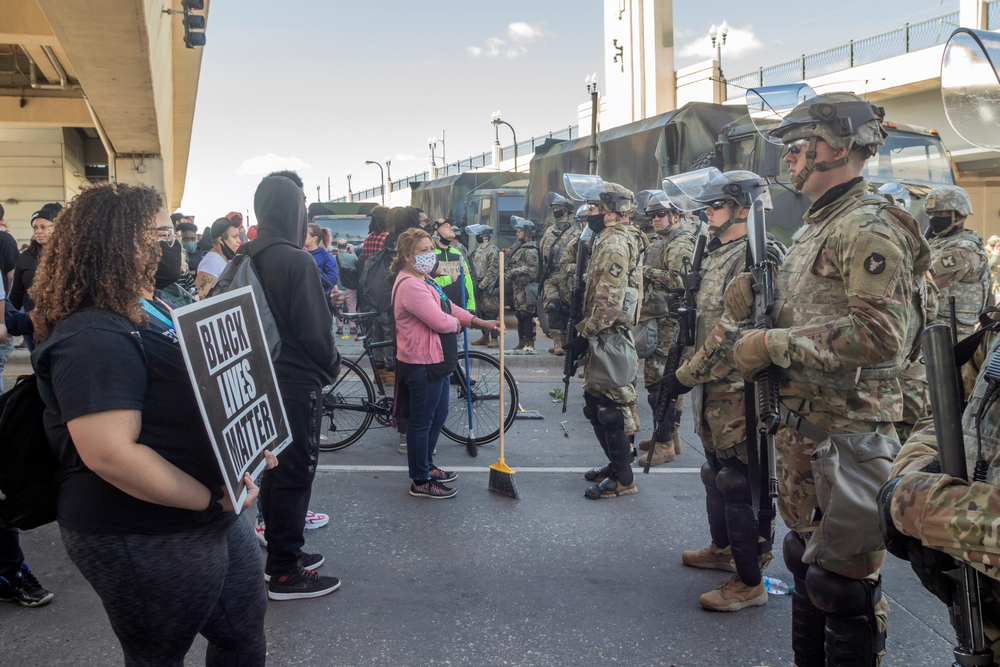 MINNEAPOLIS, MN – MAY 2020 – On the Fourth Day of Protests over the Killing of George Floyd, a Peaceful Protester Holds a “Black Lives Matter” Sign in front of a Line of National Guard Soldiers

The police killing of George Floyd, a Black man who said he couldn’t breathe as white officer Derek Chauvin kneeled on his neck, has touched off an uprising in Minneapolis that left a police precinct ablaze Thursday night. After Minnesota governor Tim Walz, a Democrat, activated the National Guard, President Trump said on Twitter Friday morning, “when the looting starts, the shooting starts.” The ACLU said Trump’s remarks amount to “directing the National Guard to murder protesters.”

With National Guard members now deployed in the streets of Minneapolis, a city with a history of police violence, U.S. military veterans of the so-called war on terror are calling on members of the National Guard to refuse orders to deploy against protesters. In an open letter to the Minnesota National Guard published Friday morning, members of About Face: Veterans Against the War (formerly called Iraq Veterans Against the War), declared, “We urge you to have the courage to do the right thing. Refuse activation orders. No amount of property is worth a single human life. Are you really prepared to carry out the violence President Trump threatened against fellow Minnesotans? We ask that you stand up for Black lives by standing down.” The letter comes amid reports that union bus drivers are refusing to transport protesters to jail.

About Face is comprised of roughly 3,000 active duty military service members and veterans who have been in the U.S. military since September 11, 2001 and are organizing “to end a foreign policy of permanent war and the use of military weapons, tactics and values in communities across the country.” This is not the first time the organization, which openly supports G.I. resistance, has called for the National Guard to stand down from U.S. protests. In 2011, when then Governor Scott Walker threatened to activate the National Guard against Wisconsin workers protesting the governor’s anti-union measures, the organization called on the National Guard to “refuse and resist any mobilization orders.”

In These Times spoke with Brittany Ramos DeBarros, the organizing director of About Face, and a veteran of the U.S. war in Afghanistan, who helped draft the letter. “We’re conditioned to think once you sign the dotted line you are trapped, you have no choice, no agency, you should avoid any political speech,” she says. “I think that’s not true.”

Sarah Lazare: Can you explain how this call to action came together?

Brittany Ramos DeBarros: Obviously many of us in About Face speak from the place of being veterans and feel a responsibility because of the violence we participated in to speak up against that violence. I think folks get confused by the blurriness between the wars we’re speaking about and police violence in this country, but to anyone familiar to systems of militarization in this country, the connections are as clear as day.

Many of us came into the anti-war movement from economic justice and racial justice struggles. We were watching what was happening and unsure of how to plug in. When we saw the National Guard was called that was a very obvious opportunity to speak out. The importance of that became even more apparent once the president was brazenly tweeting, “when the looting starts, the shooting starts.” I literally saw that tweet and saw the Minnesota National Guard tweet about how they are being mobilized to help communities.

I think so many of us identify with that branding: We were told that we were going to help people, and ended up on the ground in a situation where you can barely process what you’re finding yourself to be part of. So we reached out to urge people to make the choice some of us had wished we had made.

Sarah: What message do you most want to send to members of the National Guard?

Brittany: I would want them to take away first and foremost that they do have a choice. From our perspective, we now have strong feelings about choices we wish we had made. We are not people to sit in a place of judgement. We are people who were deeply harmed by the system we participated in and were used by, but we also acknowledge the fact that we are responsible for our actions and our harm. In my heart, I long for people to have the courage to say, “I’m not going to participate in this legacy of the National Guard being used to squash righteous anger and righteous protest.”

In the military, we’re conditioned to think once you sign the dotted line you are trapped, you have no choice, no agency, you should avoid any political speech. I think that’s not true. In a moment like this, I just want people to stop what they are doing and understand they do have a choice and at the end of the day if they participate in something that turns into horrifying violence, it might be enough to tell other people I was doing what I had to, but that’s not going to be enough for you to live with. I wish more of us had known we could pause and say, “Do I really support this?”

Sarah: In this country there’s an economic draft in which poor people and people of color, many of whom are harmed by systems of exploitation and racist oppression, are targeted for military service. Do you think there’s a case to be made that the Minnesota National Guard should identify more with the protesters than with the police?

Brittany: Without question. How do we get folks to stop trying so hard to distance themselves from the people they’re most alike? In the United States, no one wants to say they’re poor. It’s a dirty word, but why isn’t “rich” a dirty word? We all tell ourselves we’re just one break away from being another class up. As the Reverend William Barber II says, it’s not left versus right, it’s top versus bottom, and right versus wrong.

The military feels the need to cloak the truth of what you’re asked to do in all these sexy commercials and titles and ceremonies. At the end of the day you’re getting all these benefits, getting this fanfare, because you’re saying you’re willing to kill when ordered. At the end of the day all of us are trained warriors first for a reason. One of the things it’s going to take for all of us to come together is to stop speaking in euphemisms. People get very offended when you say your job in the military is to kill on command. But that is the truth. The more we talk about it as serving the country, keeping people safe, liberating the Afghan people, etc., the more we deny the truth that can set us all free.

Brittany: Usually when we’re talking about connections across movements and systems, we talk about ways the war on terror replicates the initial wars to colonize this land, to exploit the original people of this land for economic gain. It’s interesting that you ask that question, because you can’t fully understand what it means to demilitarize our society unless you understand the roots of these wars go all the way back to the founding of this country. And when we see those roots, we see that the state violence we see today is made in the same image.

Sarah: I know you are a veteran of the war in Afghanistan. Is there anything from your own experience that feels relevant to the call for the National Guard to stand down?

Brittany: There are so many connections—too many to name. When I deployed to Afghanistan, I was still a true believer. When I was handed the mission on a piece of paper that said I’m going in service of the independence of the Afghan people, and I was supposed to help them build up their infrastructure, I believed it. It was while I was deployed I kept finding myself in my position where I was arguing with commanders. We were supposed to be doing a drawdown, but you had all these commanders who wanted to do missions so they could have higher mission counts. You had people looking for a fight, because they wanted that combat action badge. I saw the toxicness and racism and corruption of leadership. It became undeniable that even if that was the right mission, the military was not the right institution to achieve it.

Why do we think the military is a fix-all for all social problems that exist? How did that become a popularly accepted and passively accepted belief in our society—that you can throw the military at any complex problem and that’s the solution, when really the military is designed to be as lethal as possible?

Sarah: Is there anything you haven’t said yet that you want to get across?

Brittany: So many of us who joined About Face thought we were alone in our questioning of what we were participating in and thought we had no options. We found that not to be true. I want people to know they’re not alone.