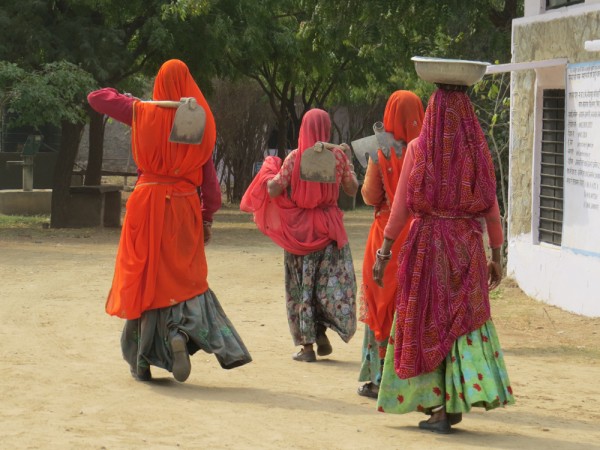 Tilonia, India –A few months ago, the Afghan Peace Volunteers began planning to send a small delegation of young women to India as guests of Barefoot College, a renowned initiative that uses village wisdom, local knowledge and practical skills available in the rural areas to improve villagers’ lives. After several suspenseful weeks wondering if families and governments would give permission for travel, we were finally able to tell hosts at the Barefoot College that we would soon be on our way. Now we are beginning the last day of our brief but rewarding visit to Tilonia, the small village in India’s Rajasthan State, where two Barefoot College campuses are thriving.

One of the villagers, Ram Niwas, has helped us learn about Barefoot College by telling us parts of his own life story and introducing us to people who have become barefoot dentists, accountants, solar engineers, radio broadcasters, teachers, water treatment specialists and puppeteers. Over the past 27 years, Ram Niwas has taken on many of these roles himself. As a ‘Dalit’, an ‘untouchable,’ he is not allowed to enter the local Hindu temple. But in his long association with Bunker Roy, a founder of Barefoot College, he has entered many places and gained experiences he never thought possible.

“The caste system gave us 3,000 years of pain,” Ram Niwas told us. “But slowly, slowly, we are moving beyond it.” He then began to tell me about women who are still subjected to the manual labor of cleaning dry toilets. They load slop from the village latrines and toilets into jars which they then carry, on their heads, to a dumping ground outside the village. The job is as dangerous as it is demeaning. People who do this work suffer infections and other illnesses. From age 13 – 15, this was how Ram Niwas earned a living.

Eventually, he heard about Barefoot College. Knowing that many Dalits worked there, he submitted an application. Bunker Roy asked if he could do accounting. Ram Niwas assured him he couldn’t but that he would be willing to work as a peon. “We have no peons here,” Bunker said. “Just be sure to keep yourself honest, and try to learn accounting.” Ram Niwas had never seen 10,000 Rupees. He had no idea how to do basic math. But after a six month training, he became a capable accountant and a volunteer, working for a living wage, at Barefoot College. At first his family was unhappy because they felt he could make more money elsewhere. Over time, however, they realized that he had gained many experiences that aren’t directly linked to gaining money. He has become an artist, specializing in Puppet Theater. He also developed the Barefoot College community radio station. He has traveled beyond India and has participated in “yatras” in India, the long walks that campaign for fulfillment of basic human rights. Now his work in communication includes many responsibilities, one of which is to help educate visitors like ourselves. 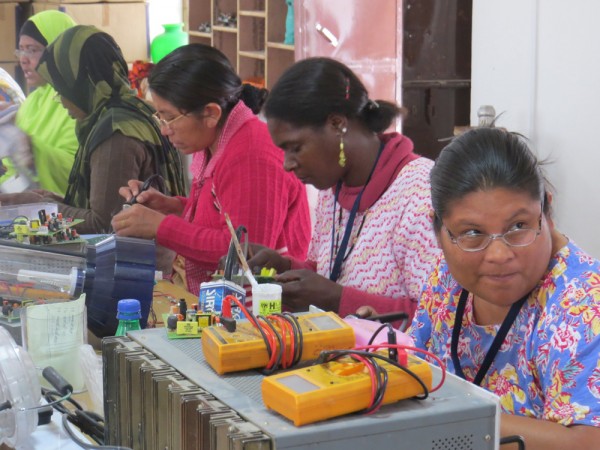 We were grateful for his translation as he introduced us to various women. Jarina does much of the accounting for Barefoot College, using a computerized excel program. Battacharya is a “barefoot dentist” who can do many procedures as long as full anesthesia isn’t required. Bila decided to learn puppetry even though the caste system despises theater work as an activity relegated to members of the untouchable class. Bila is now an accomplished puppeteer, bringing delight to many audiences and also facilitating theater workshops. Raju organizes a solar energy shop, and Magankowar teaches women to assemble solar circuit boards.

Yesterday, our delegation met with Bunker Roy. Zarghuna asked Bunker what motivated him to devote forty years of his life to creating the impressive campuses and projects that now constitute Barefoot College. Bunker Roy said that when he sees a grandmother who has lost all hope become, in six months, a gutsy and courageous woman who has learned how to be a solar engineer, he feels motivated to continue.

When we had arrived, the first college members we met were a team of people mixing, shoveling and carrying cement for a new construction project. Most of the workers were grandmothers.

Over the years, Barefoot College members have realized that young men who learn new skills often want a certificate which will enable them to take those skills elsewhere, giving them a chance to earn what Bunker calls a market wage. Grandmothers, on the other hand, have no intention of leaving their villages and families, yet they have enormous incentive to become skilled workers, improve their villages, and earn a living wage. Barefoot College welcomes them exuberantly. Now, village grandmothers are training women from other countries to follow similar paths.

Ram Niwas took us to a large workshop where 37 women, all over 35 years of age, from 11 different countries were learning to become solar engineers. Magankowar has been using sign language to teach the women, all of whom are illiterate. Seated at a long table covered with tools, circuit board components and colorful illustrated instruction manuals, the women worked with care and precision.

Many had covered their heads with wooly hats or elaborate scarves from their own countries; almost all wore glasses, and many were dressed in the bright clothing typically worn by Indian village women.

I joined several women as they took a brief break from assembling circuit boards. One of the women had begun to tell me that her two sons are working in Arizona, but that they are hoping that the U.S. government won’t deport them. We were interrupted when Ram Niwas clapped his hands, called everyone to attention and asked them to sing a song together. Suddenly, I realized that each woman was singing, in her own language, verses to “We Shall Overcome.”

The young members of our team flew to India on an airliner. Nearly every aspect of modern travel awed them. But the common sense messages taught at Barefoot College, delivered amid a campus dedicated to simplicity, service, sharing of resources and a firm declaration of equality among all people, transported our young friends into yet another realm.

“With simple resources available to all, the sun and the rain, we can create a world in which we free our potential,” said Zarghuna. “Or, we can artificially limit ourselves by fixing in our minds one way of doing things. It’s like locking our minds in a prison. If we open our minds, we can think of many possibilities.

Kathy Kelly ([email protected]) co-coordinates Voices for Creative Nonviolence (vcnv.org) The trip to India with young women from the Afghan Peace Volunteers is documented at the ourjourneytosmile.org website. 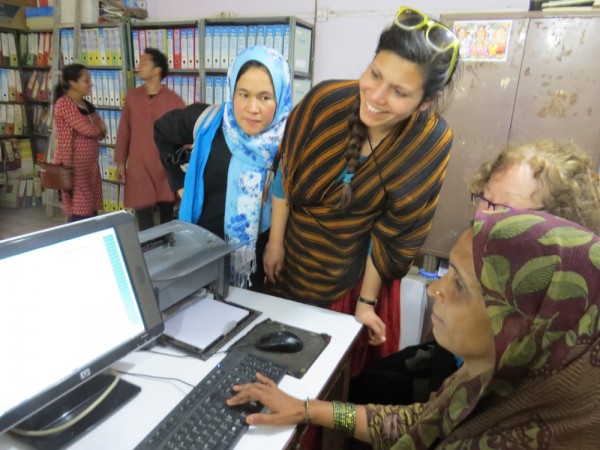