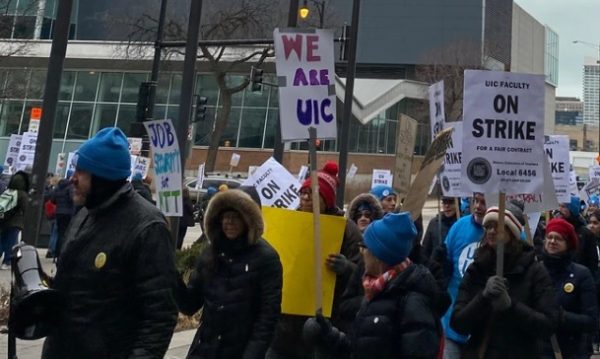 Faculty members at the University of Illinois Chicago suspended their strike on Sunday after reaching a tentative deal with school administrators that includes minimum salary increases for both tenure-track and non-tenure-track staff.

“This contract contains important gains on the issues most important to our members,” Aaron Krall, president of the UIC United Faculty (UICUF) union, said in a statement early Monday. “We are especially proud of winning $60,000 minimum salaries for our lowest-paid members and the commitments on student wellness and disability testing.”

The deal with university administrators was reached four days after faculty walked off the job last week to protest the lack of progress in contract negotiations and the school’s refusal to budge on their demands for larger pay raises to account for higher living costs.

“We won! Strike suspended!” UICUF tweeted late Sunday following a nine-hour bargaining session that produced the tentative contract deal. “Feel free to notify your students that classes will resume tomorrow (Monday). Much, much more information is forthcoming, as well as a membership meeting where you all will vote on whether or not to ratify this contract.”

As the local Chicago Sun-Timesreported Monday: “The agreement came after nine months of bargaining and 34 negotiation sessions, about half involving a federal mediator. Professors have been working without a contract since August.”

Irene Mulvey, president of the American Association of University Professors, told the newspaper that “the academic labor movement is on fire right now.”

“We’ve had decades of disinvestment at the federal and state level,” Mulvey added. “[Higher education] is at a breaking point. And I think the answer is faculty organizing.”

“The effects of the historic strike still reverberate across the nation, helping energize an unprecedented surge of union activism among academic workers that could reshape the teaching and research enterprise of American higher education,” the Los Angeles Times reported earlier this month. “In 2022 alone, graduate students representing 30,000 peers at nearly a dozen institutions filed documents with the National Labor Relations Board for a union election.”

‘Every Billionaire Is a Policy Failure,’ Says Oxfam as Global Elite Gather in Davos