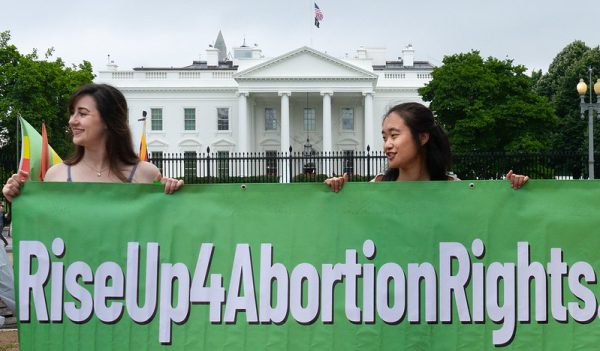 The Supreme Court’s ruling overturning the right to an abortion is an act of White supremacy. But not in the way you might think.

I’ve heard many complaints from women of color about how the ruling targets them and how the Whiteness of the pro-choice movement is to blame for the loss of reproductive rights. I reject these complaints for a specific reason.

The restrictions on birth control, sex education, and abortion are about coercing White women into having more babies. The architects of these restrictions are not scheming for more Brown or Black babies to be born. Nothing they’ve ever done indicates that they care about the survival of Black and Brown children.

Instead, their restrictions on abortion, birth control, and sex education are consistently aimed at increasing births among White women, not people of color.

Therefore, it is racially consistent and appropriate for it to be White women on the front lines of arguing for abortion rights, because it is White women’s wombs and their White children that are the commodities in this fight, as the June 24 Supreme Court reversal of Roe v. Wade makes clear.

The Dobbs v. Jackson ruling is the new Dred Scott, but along the axis of gender instead of race, that confers second-class citizenship on specific groups of people in this country, namely women and all people capable of becoming pregnant.

The walls between reproductive politics and White supremacist ideology are paper-thin; I am not sure that there is even separation between them. The politics of abortion revolve around the role White supremacy plays in trying to manage the reproduction of different racialized populations—discouraging and preventing reproduction from some populations, while forcing it in another.

This fascistic, eugenical thinking that led to the Nazi Holocaust against Jews and other vulnerable people during World War II has never retreated; it just regrouped under new euphemisms, like “protecting the unborn.” We see eugenics resurging in today’s SCOTUS decision, a ruling that also tees up attacks on contraception, queer people, immigrants, and all vulnerable populations.

By asserting that abortion bans are aimed at White women, I don’t mean that vulnerable populations, such as Black, Indigenous, and people of color and LGBTQIA+ people, will be exempt from harm. Yes, we will be injured—disproportionately so—as we are always harmed by racist and sexist policies, because it is anticipated that Black deaths from abortion restrictions may increase by 33%. We are not the primary targets of the restrictions; we are collateral damage.

As I explained in a 2004 book I co-wrote, Undivided Rights: Women of Color Organize for Reproductive Justice, our Black feminist theories of intersectionality and reproductive justice have predicted this attack on human rights for decades, ever since the Brown v. Board of Education decision in 1954, which outlawed segregation. That was the first major judicial setback for the promoters of White supremacy, who have been systematically organizing ever since, because they recognize that a “one man, one vote” democracy would not permanently protect White supremacy as the dominant framework for laws of the land. We should expect continuing attacks on the 14th Amendment, which provides citizenship rights for everyone who is not a White male, to follow this unprecedented rollback to 19th-century standards of who counts as an American. Perhaps women’s 19th Amendment voting rights will follow.

The White supremacists’ demographic nightmare is that people of color are poised to outnumber whites by 2045. “Respectable” racists like Donald Trump and Tucker Carlson sound the alarm about “White replacement” theories that lead to violent vigilantes massacring Black, Indigenous, Jewish, Muslim, and Latino people, such as the mass shooting of Black people in Buffalo, New York.

The Supreme Court Ruling is in Fact About Enslavement

Let’s be clear about what the Supreme Court ruling means. I’ve heard some people, including White women, say forced pregnancy is analogous to slavery—a statement others consider racist.

In fact, I think the analogy is appropriate. Anytime you are forced to submit your body to the improvement of someone else’s well-being, it is an enslavement. While every historic genocidal horror has its own specific characteristics, there are some consistencies across the board: the unequal treatment of human beings, the wanton disregard for life, the disregard for the human rights of the people who are vulnerable, and the manipulation of bodies for the enrichment of a privileged population.

People are risking death in childbirth, not to mention the years of sacrifice that go into raising a child. Caring for others should be a choice if it involves sacrificing your body and risking your life. This overturning of Roe is the unwarranted imprisonment, killing, and coercion of people to achieve state-sanctioned goals, and, in that particular way, the slavery analogy works on abortion bans. It even extends to the role of bounty hunters in Texas’ abortion ban SB 8, not unlike the fugitive slave catchers of a century ago.

Black people have rarely had the luxury of believing the U.S. jurisprudence system was going to lead to our liberation. In fact, we have been disabused of that hope too many times when the Supreme Court has denied us our human rights. I’ve always maintained that U.S. laws upholding human rights are only as good as the social movements that support them. We need, therefore, to make sure our social movements are clear in our agendas and that we have solidarity with each other.

Here’s How We Fight Back

We’re going to do whatever is necessary to save women’s lives.

We will continue to do what we always have done, which is to center the most vulnerable people in our communities and to make sure they have access to the services they need, whether via paying for abortions through our abortion funds, providing safe transport, protecting human rights defenders, or creating a black market for abortion pills.

We will rely on others to participate in the struggle with us—or at least get the hell out of the way so we can do what we need to do.

I’m disheartened by the infighting I see within the reproductive justice movement. It leads me to wonder whether we can use “calling in” practices of the kind I train people in via my online courses, to bring all defenders of abortion rights together.

White supremacy is the ideological driver of reproductive politics, and to resist the social engineering the Supreme Court ruling engenders, we’re going to have to call each other in to understand the simultaneities of our struggles. Instead of critiquing the predictable Whiteness of the movement, we can sophisticate our analyses to recognize the actual appropriateness of the Whiteness of the movement. Simplistic racial optics are not what we need at this time. We need to stay focused on defeating the opponents to all human rights as the real threats to our survival.

Fascism is definitely in our future unless we work together in these tumultuous times.

Loretta Ross (born on August 16, 1953 in Temple, Texas) is an academic, feminist, and activist who advocates for reproductive justice, especially among people of color. She is Associate Professor of the Study of Women & Gender at Smith College in Massachusetts. As an activist, Ross has written on reproductive justice activism and the history of African American women. She joined the women's movement in 1978 by working at the first rape crisis center in the country and learned about women's human rights, reproductive justice, white supremacy, and women of color organizing. She also researched and fought hate groups such as the KKK in the 1990s, founded a national center for teaching people about their human rights, and co-founded SisterSong. She works to share her experiences with emerging activists in hopes that you will join the transformative human rights movement that has changed the world.

A Feminist Perspective on Katrina