New Year at The New School 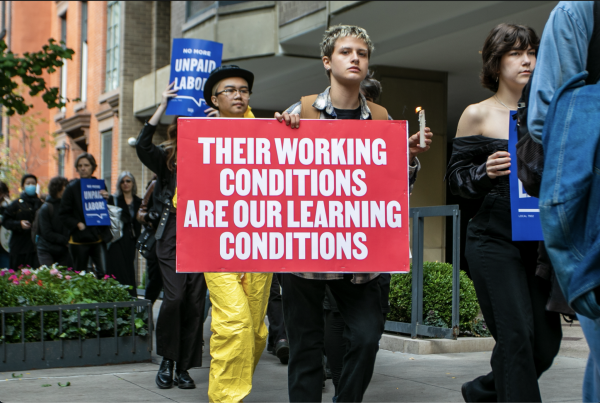 The New School was founded in 1919 in New York, by a group of scholars who were dissatisfied with the state of critical thought in American academia, and wanted to establish a progressive, free school unshackled intellectually by financial interests. They envisioned most school funding going toward research and education instead of administration, intending that it “would become the center of the best thought in America, would lead in emancipating learning, and would be a spiritual adventure of the utmost significance”. In 1937 Thomas Mann spoke at The New School and tasked them with preserving the spirit of free inquiry amidst the rule of oppressive governments during World War II. To that end he recommended the adoption of the motto “To the Living Spirit”. Current political and economic hegemonies suggest that we may be in increasingly oppressive times.

Facilitating a participatory educational environment was a central part of the New School from the beginning. In this spirit, working people were offered classes in the evenings so they could attend, students and faculty would together decide on curriculum and course design and academic staff took an active role in the administration of the School. A formal administrative structure only developed after Alvin Johnson became director in the 1920s.

However, behaviour of recent administrators of the New School led it increasingly towards a neoliberal model and into conflict with staff and students. Changes made from 2001 onwards, while Bob Kerrey (an ex-politician accused of war crimes in Vietnam) was president, caused occupations and a vote of no confidence between 2008 and 2009.  David van Zandt’s efforts to further the neoliberal changes in the university was marked by occupations in 2011 and 2018, leading up to the current administration’s president, Dwight McBride, and the current situation at the New School. Under McBride’s leadership departments have been earmarked for closure, and or merger, and a continuation of the poor working conditions particularly facing part-time staff. Tensions came to a head when the administration began dragging its heels on the long overdue renewal of contracts.

Negotiations began in earnest with the administration and staff represented by union branch ACT-UAW local 7902. They negotiated for five months without success. During negotiations the administrators handed responsibility for negotiating the new contracts to an external law firm, a sign that ultimately The New School had no intent to offer the improved conditions that the staff sought. This ultimately led to the union calling for a strike on the 16th of November 2022. The strike did not immediately result in success for the strikers, however, subsequent widening of the strike included support from students, whose occupation of university buildings eventually resulted in a climb down by the university and improved contracts and healthcare for part-time staff. Arising from that conflict is a greater solidarity between students and staff that is developing into a movement to push to fundamentally alter the structure and operations of the university.

New Year at The New School

Before the next semester gets underway at the New School, students, parents, alumni, faculty and staff will meet to begin to develop strategy and procedure to bring about a ‘participatory New School’. Under the banner of the One New School Coalition, formed on December 12th 2022, a set of objectives and demands were outlined to change the operating structures of the New School to those of a self-governed university. The solidarity actions that brought about the improved contracts for part-time academic staff are intended to be employed again in order to advance the aims of the Coalition. They have invoked the New School motto in the spirit it was intended, this time, to protect free inquiry from the oppression of the market.

The Living Spirit of Occupations and Declarations

The Coalition expects that faculty members in Parsons School of design, Mannes, SPE and CoPA will schedule votes of no confidence in the current administration. They intend to seek the removal of President McBride, Provost White and Shobowale, the Vice President of Business and Operations. In support of the no confidence votes the students are committing to occupy the University centre to achieve the removal of all administrative staff that were responsible for the intimidatory, anti-union tactics that were employed to break the strike. While cognizant of the aim towards self-governance, the Coalition intend to initially maintain the current administrative structure while allowing for newly appointed administrators to be recalled by vote of no-confidence from the One New School Coalition. A stipulation for the appointment of new administrators will be that they work to realize the self-governing intentions of Coalition for the New School.

The Coalition intends vetting the board of trustees one by one and creating full financial transparency for the funding of the New School. They initially intend to control 10% of the discretionary budget of the school to implement Participatory Budgeting at the New School. Over time the Coalition hopes to control the entirety of the New School’s discretionary budget. It also intends to convert the president’s townhouse to communal property of the School and redefine its future use.

The Coalition is seeking a number of changes to benefit current and future students by freezing academic tuition fees for the next five years, as well as increasing protections for students suffering from ill health who have difficulty meeting course requirements. As well as increasing affordability and accessibility of resources and course material they also intend to improve facilities and supports for minorities.

The New School has a long tradition of liberal associations and it currently boasts the Platform Cooperativism Consortium among its affiliates. It is striking then that this significant movement for change has not occurred sooner in the development of the New School. However, the pressures of operating in an educational environment increasingly influenced by a neoliberal market driven model is at odds with really educating students and supporting research beyond the influence of market whimsy. It is also at the expense of the kind academic freedoms the New School was founded upon. Only now is the original vision for the New School potentially becoming a reality.

The One New School Coalition seek to distance themselves from allegiance to market forces, in line with the vision of those who founded the New School, who sought to distance themselves from the University of Columbia’s requirement to pledge allegiance to America. These forces have caused students to amass unsustainable debts in pursuit of an education delivered by adjunct professors struggling to make ends meet and often taking extra employment just so they can afford to teach, who suffer intolerably onerous conditions of work to teach subjects for which they have a genuine passion. It is these unsustainable outcomes of a neoliberal market model of education that those seeking change in the New School seek to avoid. Instead they seek an alternative model for a university.

Hopefully, the example and lessons from the movement at the New School can become a model for university staff going through similar struggles other universities. The travesties of an education system beholden to neoliberal markets are a global phenomenon and the conditions experienced in the New School are increasingly a reality for educators internationally.

A participatory university is within reach. Paying close attention to the progress of the solidarity developed between students and staff in the coming months will hopefully show how this can come about.