Moral injury and the pandemic of violence 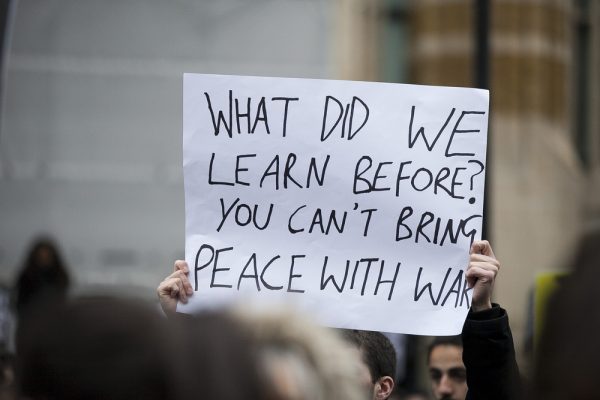 “The vet in the mirror may be wounded in the soul — and it is your duty to carry this one last vet for help.”

This is not an easy reach — into the soul of the loneliest man or woman on Earth, which is the definition of everyone who is on the brink of committing suicide. For decades, Roland Van Deusen has been reaching out to a particularly endangered subgroup of such people: abandoned veterans, left with nothing but their own traumatic memories, their shame and guilt.

The words above are from a two-minute video that is suddenly, in this time of lockdown, his only means of reaching out to vets. A counselor and psychiatric social worker as well as a Vietnam-era Navy veteran, Van Deusen has been working with vets and supporting veterans’ groups for years, telling the lost they are not alone . . . that the moral injuries of war can be healed.

Oh God. This hasn’t gone away because of the coronavirus. The nation’s, and the world’s, moral injuries are still present and hidden, silently continuing to destroy people’s will to live. People still need help for more than just COVID-19. The blowback of our wars is still with us, complicating the present moment.

“Eighteen years of wars have drained the health system, wrecked the social safety net,” he lamented the other day as we talked about this. “Trillions of dollars spent to kill other people. This is moral bankruptcy. Totally FUBAR. There’s not a politician who says anything about the wars . . .”

Yet, he noted, there have been at least vet 60,000 suicides — just in the U.S. — over the last decade, far more than the deaths of U.S. troops in combat. And such a number doesn’t count the quasi-suicides: death by alcoholism, drug abuse, car accident or whatever. Something is deeply wrong. More than one silent killer is loose. And it’s not simply a problem faced by individuals, any more than the pandemic is an individual problem.

“There’s a rot from within, like the Roman empire.”

So when Donald Trump blames China for the virus, when he cuts funding to the World Health Organization, when he imprisons asylum seekers at the border, when he maintains sanctions against Iran and orders the Navy to open fire at Iranian vessels — this is the rot from within manifesting itself. The rot causes us to worship the problem and run from the solution. The problem isn’t simply war but xenophobia: creating — and dehumanizing — an Enemy. And Trump is just a symptom.

It’s time to rethink who we are. Are we one? That seems to be the consciousness that is emerging in the wake of the coronavirus, but what does that mean, beyond the fact that we are all vulnerable in a pandemic?

When we act as though we are not one — when we play war — the pseudo-unity of war is exposed as a farce by the fact that soldiers are often institutionally abandoned after their combat role is over. The psychological wounds that many of them suffer have, in recent years, been given the name “moral injury” — a term with far more awareness and depth than earlier, dismissive terms. It was called “shell shock” during World War I and “battle fatigue” in World War II. In recent years, “post-traumatic stress disorder” emerged, which kept the matter in isolation: a “disorder” to be fixed. It’s your problem, not ours. But the term “moral injury” opens up everyone’s conscience and begins to make the matter collective.

“Moral injury,” writes Matthew Hoh, “is a wounding of the soul and spirit caused when a person transgresses against her or his values, beliefs, expectations, etc. Very often moral injury occurs when someone does something or fails to do something, e.g., I shot and killed that lady or I failed to save my friend from dying because I saved myself. Moral injury can also occur when a person is betrayed by others or by an institution, such as when one is sent to a war based on lies or is raped by their fellow soldiers and then denied justice by their commanders.”

This begins to explain why, from the military point of view, suicidal vets have to be left alone with their troubles and dismissed as emotionally disabled. To do otherwise — to see the matter collectively — requires acknowledging that by participating in a war, by following orders and doing what they were told, they were caught in a moral paradox created by the military and by war itself. They were forced to violate their deepest moral beliefs. That begins to undo the recruitment value of terms like “serving one’s country.”

As Tyler Boudreau wrote: “What’s most useful about the term ‘moral injury’ is that it takes the problem out of the hands of the mental health profession and the military and attempts to place it where it belongs — in society, in the community, and in the family — precisely where moral questions should be posed and wrangled with. It transforms ‘patients’ back into citizens.”

Citizens who have been wounded to the soul.

And the soul is collective, which explains why, as Lt. Colonel David Grossman, author of the book On Killing, told Roland Van Deusen, “suicide can indeed be contagious.”

We have another pandemic to stop.

Robert Koehler ([email protected]), syndicated by PeaceVoice, is a Chicago award-winning journalist and editor. He is the author of Courage Grows Strong at the Wound.

How Safe Can We Really Be?

Before The Bombs Come The Platitudes

Dancing on the Edge of Hell

Sexual assault and the American way

Transcending the certainties of war

Afghanistan on the brink of disaster

The court of ecological awareness