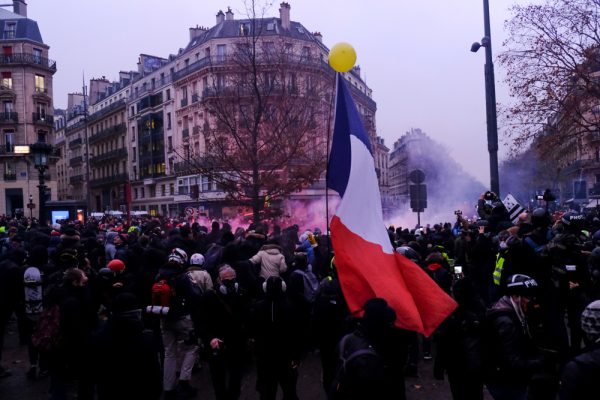 Protesters clash with French riot police during a demonstration against pension reforms in Paris, France, 05 December 2019

One of the many groups taking part in the massive general strike in France this week, and joining forces with the year-long Yellow Jackets movement, are the country’s public school teachers. The “coup de grâce” for teachers was the Macron administration’s proposed teacher pension reform, in which retirement payments would be calculated based upon salaries earned throughout a teacher’s career rather than their last paychecks.

In other words, a teacher’s earnings as a new graduate and during the years they gained experience and possibly pursued advanced training or specializations would carry equal weight in calculating the amount they would receive upon retiring from service in public education years and decades later.

One teacher’s union put it this way. A retiree with a 40 year career in teaching might have finally attained a salary of 3,200 euros a month. Right now, they would retire with 2,281 euros a month, but after the reforms, that would decrease to 1,803 euros.

All in all, it’s a disingenuous way for a neo-liberal government to claw back the final thanks offered to yet another group of civil servants in the name of budgets and saving costs. But it is also another example of neoliberalism’s war on public education.

“While teacher salaries [in France] are below the average of OCDE countries, this regressive retirement plan is yet another example of the lack of recognition for those who on a daily basis devote themselves to the success of all their students throughout the country,” decries Yannick Trigance, regional council member for the Socialist Party’s National Higher Education Secretariat. According to the council’s calculations, a retired teacher could lose between 300 and 900 euros a month after years of teaching.

Trigance goes on to describe the deleterious effects of the new policy upon public education in general. Citing figures demonstrating decreased applications for teaching positions of as much as 20% in certain fields, Trigance asks, “Who would embark upon a career in which working conditions, salary and retirement are flagrantly disregarded by both political leaders and society at large?”

The effects are already evident in the country’s less well off neighbourhoods. In Paris’ poor northeastern suburbs where the population is primarily composed of immigrants and children of immigrants, 10% of teachers are contractors who may not be qualified. And often classes are simply not held. According to Trigance, pupils in that region have lost 20% of their class hours due to a lack of substitute teachers.

The September suicide of a northeastern suburb public kindergarten principal is still fresh on the minds of striking teachers. Citing isolation and exhaustion, the 58 year old ended her 30 year career in education over the weekend of 22 September 2019.

In an email and 15 posted letters, she wrote, “The succession of inspectors who come to [the school] don’t realize just how exhausted everyone is.” She expressed how educators feel alone in their situations due to lack of support when they are pitted between government policy and student needs.

The authorities claim the letter and emails are evidence for the police and warned teachers not to reveal their contents. However one teacher did speak about the letter anonymously, explaining that he thought “she wanted it to be known, and for her act to mean something.”

“She put words to what we are experiencing. In her letter, she describes our daily routine. The tasks that mount up that we never get relief from. The reforms that accumulate, going this way and then that way… we’re always on the front line for everybody. In front of the board, the city, colleagues that we have to help and support with changing teams that often need training… They’re sending us more and more contractors who have absolutely no training or even a diploma, who can’t handle the children and we have to help them.

“I understand what she did. The teaching profession is very consuming, it takes an enormous toll on our lives. When you are under an avalanche of things to do, it’s hard to step back and be able to say, ‘Ok, it’s not my fault, I can’t do everything that they’re asking of me.’ It’s difficult and a lot of colleagues crack.

“The department of education is rarely there to support us. My colleague talked about that in her letter. This feeling of powerlessness that we all feel. In my school, for example, many children don’t have a place to sleep, their families are on the street. That’s also the reality we’re faced with, without any support.”

Recently, educators were asked to become moral arbiters who should refuse to allow mothers wearing hijab from assisting on school field trips. In 2017, the Ministry of Education announced the formation of “secular units” in schools to ensure their freedom from religion, and in September, the minister declared his intention to increase their scope. Already forbidden from wearing veils or religious symbols themselves for the last 15 years, teachers and principals desperate for help from the community find themselves the subject of ire from all sides, confronted by anti-Islamic conservatives, secular liberals, and humiliated parents, as they negotiate yet another assault on their ability to complete their mission as educators.

The Face of Uvalde

Forget Me If You Can

Honduras: Caravan of the Damned

To Our Confederate Dead: Take It Down