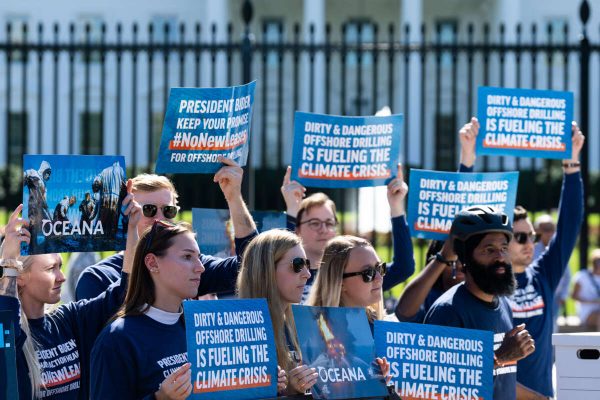 For the past two years, I have been shocking D.C.’s finest college student activists by telling them to stop taking their grievances to the Capitol lawn. Students who care about climate justice have been lobbying the U.S. government for climate legislation for decades amid exponentially worsening natural disasters and promises of carbon removal. It is time to face the music: Our representatives (including the Democrats) are in the pockets of the fossil fuel industry and we need to stop pretending they will legislate us out of the climate crisis.

Enter the tried-and-true arena: the university.

The university is uniquely positioned in its ownership of a massive amount of financial and intellectual capital; student activists have understood this since the ‘60s. However, what makes the university a particularly important setting for climate activism is how the fossil fuel industry has come to rely on academia. The industry often funds climate and sustainability research alongside research that spreads climate disinformation to both greenwash its reputation and increase the sector’s profits. My organization, Fossil Free Research, has mobilized university students and faculty across the country to call for a ban on fossil fuel funding in academia. While we have built a coalition of Nobel Prize winners and IPCC authors around the issues of academic freedom and conflicts of interest, Fossil Free Research and other movement organizations have not yet explored an argument opposing fossil fuel funding in the university from a labor perspective.

Over the last half century, institutions of higher education have adopted a corporate ethos, managing and marketing students rather than “educating” them. The U.S. university represents the model capitalist — operating as the owner of real estate, dictator of wages, exploiter of labor and financial investor. The university business model is roughly as follows: charge ridiculous amounts in tuition with the promise of a return on investment via future wage relations; invest these funds in corporations in exchange for the corporate bankrolling of research; exploit students and faculty for their labor and production of data; provide data, research and laborers to the above funders; distribute profit to shareholders; convince students that they are consumers as opposed to laborers, repeat. As Marc Bousquet put it in his book, How the University Works, “[Most] undergraduate education is conducted by a superexploited corps of disposable workers.” The financialization of education has reduced the university to a place of business and the student to a worker.

Contrary to what your university administration will tell you, students aren’t the lucky consumers of elite knowledge as much as we are laborers. To that end, we are fundamentally exploited, performing unwaged labor in the lab, the basketball court, as interns, as makers of ideas and culture, and as debtors. And those of us that do earn a wage will never make enough to live. Every second that you sit in a classroom and contribute to the exchange of ideas — that the university will certainly sell — is a moment of work. As students, we are servants of capital in the space of the university.

Funding often dictates working conditions as well. The fossil fuel industry has historically reviewed its funded research before allowing it to be published, limiting the autonomy of researchers. For instance, when Harvard researchers found ExxonMobil guilty of misleading the public about climate science, Exxon sent the Vice President of Research and Development to discredit them. In this way, fossil fuel research funding has become an issue of labor. When researchers agree to produce outputs for the university, that is who they are promising to work for, not the funders. Researchers should not be forced or even allowed to produce biased data because of their funders. Student and faculty unions should consider fossil-free research and funding transparency as labor conditions.

Funding transparency is necessary for researchers to understand who they are really working for. Student researchers are commonly brought onto faculty projects or dissertation research to simply collect data and never interact with the project funder, causing them to unknowingly contribute to biased or unethical research. However, funding transparency is not sufficient. Banning fossil fuel funding is the only way to prevent the exploitation of university laborers for the work of the fossil fuel industry, because, knowingly or not, any dealing with the industry is working for them. It is also important to note that researchers are often grad students and university faculty, whose livelihoods depend on producing research — they should not have to put their livelihoods at risk if they refuse to produce biased or interest-conflicting research. Refusing to perform the research organically is not an option for many, so organizing for fossil-free research as a union demand keeps these folks safe. Adam Cooper, a graduate student researcher, organizer with Fossil Free Research and SRU-UAW member at the University of California in San Diego, says, “we should be making the argument to expand workplace protections and workplace issues that concern external influence on the work of researchers.”

It is time for students to self-identify as the laborers that they are. Cooper says that “it goes beyond the union as a vehicle when you start building a class consciousness and a direct-action culture in a university.” When we start to understand the impact our labor has on the university and, by association, the fossil fuel industry, we can allow the role of the union to expand beyond traditional wage relations and enable it to protect working conditions of all kinds, including those dictated by funding partners. “The union is very centralizing because it is often the easiest thing for workers to get involved with — the identity as a worker is very inherent,” Cooper says.

“Social justice” issues are not particularly new concepts for the union to take up. The first graduate student labor union, organized at the University of Wisconsin-Madison in the 1960s, advocated against the Vietnam War alongside increased wages and representation. Similarly, there is historical precedent for organizing against industry funding of university research. Though not a union, Students for a Democratic Society behaved as one, defending students as workers on college campuses and protesting Dow Chemical and General Electric’s manufacturing of napalm and military aviation equipment. Today, students are organizing across the world to cut the tie between academia and the fossil fuel industry through divestment and “No Fossil Fuel Money” campaigns.

Universities occupy a unique space in their ability to vastly alter the social license of an industry through research. At universities across the globe, students must leverage our labor power and question the interests of the universities we pay thousands to attend and work for. Demanding a fossil fuel money ban is setting working conditions and giving laborers more control over how our work affects this planet. By rejecting fossil fuel funding, we are refusing to work for or with an industry whose business model relies on the sacrifice of marginalized communities and the planet.