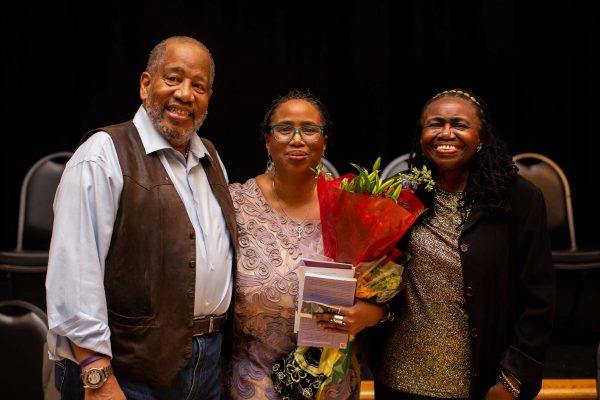 When they met in 1965, Gwendolyn Zoharah and Michael Simmons had already dedicated their lives to organizing to topple Jim Crow. Both were members of the Student Nonviolent Coordinating Committee (SNCC), a civil rights organization that emerged from the sit-ins and civil disobedience throughout the South. Like many of their SNCC co-organizers, both had been arrested, attacked and estranged from their biological families for their movement activities. Soon after, they fell in love, got married, started a family and continued pressing for civil rights, Black Power and an end to the war in Vietnam. In 1967, growing disagreements about the role of Black Power culminated in their expulsion from the SNCC. Even after their ouster and after their marriage disintegrated, the two remained committed to fighting oppression through grassroots organizing, both together and separately.

Author and historian Dan Berger spent years interviewing Zoharah and Simmons about their decades in the movement. He contextualized their recollections with research from the collections at the Schomburg Center for Research in Black Culture; the American Friends Service Committee, where both Zoharah and Simmons worked after their ouster from the SNCC; and the scattered archives of SNCC and other grassroots groups. What emerged was a joint biography of the Black Power movement in the United States through the experiences of one family who had committed their lives to the struggle for justice, entitled Stayed On Freedom.

Berger, Zoharah and Simmons sat down to discuss their forthcoming book, what Black Power means to them and how the struggle for justice is a long process.

Victoria Law: Why did you decide to write Stayed On Freedom? Who is it for?

Dan Berger: I first met Zoharah as an undergraduate. Hearing her stories inspired me to do my own reading on the civil rights movement, and I saw that some of the things that she was talking about didn’t exist in the literature.

That really inspired me to write the book. As I was writing it, it also became about building a life on the left, being a parent, becoming middle aged and thinking about how we stay involved and stay committed, and how we keep learning and growing over a lifetime and not become ossified into one rigid framework. I hope that the book can be of value to people who are asking similar questions.

Gwendolyn Zoharah: When Dan tossed the idea, I said, “You gotta be kidding. Nobody’s gonna be interested in us ‘nobody’ foot soldiers.”

I had met Dan when he was a freshman here at the University of Florida and stayed in touch with him all these years. I’m very impressed with the other books he had written and the work he was doing and I was honored that he wanted to do this.

We participated in years of interviews. We’re talking 60 years [of organizing]. To think about the work that Michael and I have been engaged in, both together and separately, and all of the research Dan was doing to contextualize the work, has been a relearning experience.

And given that I’m still out here on the battlefield, as we used to say, and working with younger activists, it’s good to be able to share not only what I recall, but what now has been documented, with the younger organizers I’m working with in Black Lives Matter, Dream Defenders, and other groups.

Michael Simmons: [What] I really wanted to capture — particularly having worked in Europe over the last 20 years — was for people to see that struggle was constant and that we who are oppressed don’t have the option to quit.

Berger: It’s so important that this is a story of two foot soldiers and everyday organizers. Most social change is made by people that you’ve never heard of. So many of our narratives of how change happens are told through famous speeches, given typically by men, and it just misses so much of the actual process through which change happens.

The subtitle of this book is “The long history of black power through one family’s journey.” Can you talk more about tracing the movement through the lens of a family?

Berger: We often talk about Black Power as a late ‘60s and early ‘70s phenomena. It’s typically geographically bounded as well as very temporally bounded: We have the civil rights movement in the South and we have Black Power movement in the North; civil rights as a nonviolent thing in the South and Black Power as this gun toting, beret-wearing thing in the North. I’m being a little bit glib, but not too much relative to how the story is often told.

When we actually study what it meant in people’s lives, things are much messier. And the fact that Zoharah was born and raised in the South, and Michael was born and raised in the North, and they both contributed to the development of Black Power as a phenomenon, as a politic, within one of the standard-bearer organizations of the civil rights movement already throws that whole conventional story out of whack.

When you learn about their lives, and listen to them talk about their lives, you see that Black Power has an imprint that extends well beyond that narrow time period. In fact, groups like the National Black Independent Political Party and the Philadelphia Workers’ Organizing Committee, two examples the book talks about, both come out of Black Power in different ways.

Zoharah: I was born in 1944, I grew up in Jim Crow — back of the bus, no place to have a meal inside, unless in some Black-owned cafe, the whole thing. Memphis, Tennessee, where I was born and raised, was a segregated city. And I was brought up to know my place. I mean, not that anybody was teaching me that it was right, but they would teach me it as survival. My grandmother would say, “There’s nothing we can do about it if they come and get you. We have no way of protecting you.” I grew up with that.

And then to go to Mississippi, which was even worse. At least in Memphis, my grandmother and granddad could vote. But of course, they could vote only for white people.

But to experience Mississippi Freedom Summer, the organizing of the Mississippi Freedom Democratic Party, the violence that we were subjected to, moved me toward understanding that, beyond breaking down the Jim Crow laws and securing the right to vote for Black people, we needed power.

I still think that Black people in this country need Black Power. This is not in any way to talk about a separatist agenda, even though I was attracted to that — joining the Nation of Islam, becoming a part of the Republic of New Afrika, and being drawn to the liberation movements in Africa. But where I would say I am now is that we need a combination of elements from both of these strands within the Black Freedom Movement.

Simmons: I grew up in the North, but I spent time in the South during my childhood, going back to visit family. When people ask me about my civil rights awareness, I always start with Emmett Till because it was the first time that words like “racism” and “civil rights” meant something to me. I saw that Emmett Till could have easily been me. I had absolutely no fear when I was in the South. My cousins would warn me about white people and I was like, “Get out of here, these white folks scared of us, they’re not gonna bother us.” And [until Till’s murder], I had this very flip attitude about the potential of any harm coming to me or anyone that I was around. That, plus Little Rock and school desegregation a couple of years later. Those two realities set firmly in my mind. As I started hearing about the Freedom Rides, my brain got focused.

There’s nothing unique about Black Power when you think about it in terms of oppressed people controlling their destinies. At the time, I saw it in a Black context. But the work I’ve done over the past 20, 25 years, I see that it’s as significant in Eastern Europe, working in Yugoslavia with oppressed women, with Roma, as it is in Jackson, Mississippi, or Little Rock, Arkansas. It’s a question of oppressed people controlling their lives.

Dan, you said Gwendolyn and Michael told you stories that you didn’t find in the existing literature. Can you share one of those stories?

Then I looked at the civil rights scholarship — this was 20 years ago — and see the Atlanta Project described as this super sectarian group of northerners who invaded the SNCC and destroyed the organization.

That’s why the Atlanta Project occupies center stage in the book — literally in the middle of the book, but also figuratively in that it gets two chapters.

I interviewed Michael for [my previous book] Captive Nation. A lot of his experiences in prisons [for being a conscientious objector and refusing the military draft], several of which are also captured in this book, show how unstable U.S. prisons were in the late ‘60s, early ‘70s. There were protests and demonstrations. They show that the Atlanta Prison Farm in 1966 and the Allenwood penitentiary in 1970 were experiencing these kinds of profound challenges.

It’s not just the Atticas or the San Quentins. It’s not just the infamous prisons with the rebellions that were nationally broadcast or that people were writing books about. [In other prisons,] there were protests and sit-ins and people cussing out the guards. That was just par for the course. Knowing this helps us understand not only the centrality of jail and prison to this sort of movement experience, but also how much power people had, even within that context.

What do you want readers to take away from your family history and this book?

Zoharah: That the struggle for social change for social justice is a long process. It builds on what has come before. And hopefully, people who are social change organizers and activists will understand that this is a lifetime commitment.

Simmons: That about sums it up for me. There’s a song we used to sing in the SNCC called “Freedom is a Constant Struggle.” And that’s really what it is.

I would like people to at least come away understanding that Black Power was about love. It wasn’t about hostility to anything other than oppression. During the heyday, one of the most intense struggles in the SNCC, we were never anti-white or against white people. We always had white relations, but we had philosophical and political differences.

Berger: We have more power than we recognize, and that the movement is bigger than our contexts. It’s bigger than whatever organization we’re in at the moment. And we can both understand that we’re more powerful than we think, but also that we are part of this bigger thing.

This interview has been lightly edited for clarity.

To End Mass Incarceration, We Need to Bust the Myths That Prop It Up

Sex Workers Are Fighting Back

Ozrganizers raised over $233,000 to bail out hundreds

Prisoner’s Right to a Degree

‘We are humans, not animals’

Women in Prison Speak Out