Clean Energy or Weapons? What the ‘Breakthrough’ in Nuclear Fusion Really Means 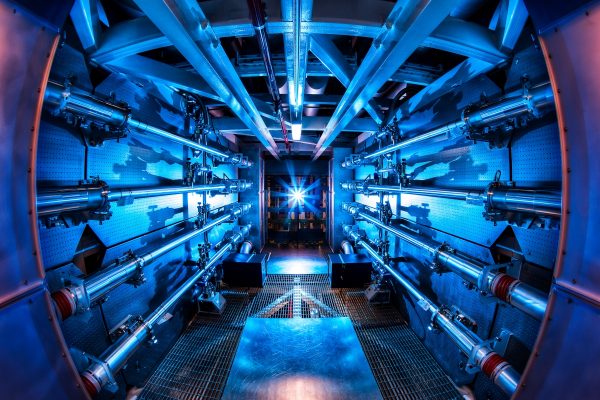 On December 13, the US Department of Energy (DOE) announced that the National Ignition Facility (NIF) at the Lawrence Livermore National Laboratory had reached a “milestone”: the achievement of “ignition” in nuclear fusion earlier in the month. That announcement was hailed by many as a step into a fossil fuel-free energy future. US Senate majority leader Charles Schumer, for example, claimed that we were “on the precipice of a future no longer reliant on fossil fuels but instead powered by new clean fusion energy”.

But in truth, generating electrical power from fusion commercially or at an industrial scale is likely unattainable in any realistic sense, at least within the lifetimes of most readers of this article. At the same time, this experiment will contribute far more to US efforts to further develop its terrifyingly destructive nuclear weapons arsenal.

Over the last decade or so, there have been many similar announcements featuring breathless language about breakthroughs, milestones, and advances. These statements have come with unfailing regularity from NIF (for example, in 2013) and the larger set of laboratories and commercial firms pursuing the idea of nuclear fusion. Apart from the United States, similar announcements have come from Germany,  China and the United Kingdom. France is expected to take its turn once the International Thermonuclear Experimental Reactor (ITER) starts operating. The reactor is currently being built in Cadarache, France, at an estimated cost of somewhere between $25 billion to as high as $65 billion, much higher than the original estimate of $5.6 billion.

These incredibly high costs also explain why such announcements are made in the first place: without the excitement created by these hyped-up statements, it would be impossible to get funded for the decades it takes to plan and build these facilities. Conceptual design work on ITER began in 1988.

Of course, that timescale pales in comparison to the time period of the first major announcement about fusion-generated electricity. That took place in 1955 when Homi Bhabha, the architect of India’s nuclear programme, told the first International Conference on Peaceful Uses of Atomic Energy in Geneva:

“I venture to predict that a method will be found for liberating fusion energy in a controlled manner within the next two decades. When that happens the energy problems of the world will have been solved for ever.”

That would not be the last prediction about the imminence of fusion power that would be wrong.

The first challenge is to have enough fusion reactions in the pellet that is blasted by lasers to produce more energy than is put into the target. That was what seems to have been seen at NIF: the reports say that the lasers pumped in 2.05 megajoules of energy and about 3.15 megajoules came out. All of this over a time period of a few nanoseconds (a nanosecond is one billionth of a second). The figure of 3.15 megajoules might seem like a lot but it is only 0.875 kilowatt-hours, that too of heat, which would produce perhaps 0.3 kilowatt-hours of electricity if it was used to boil water and drive a turbine. (For comparison, a rooftop solar panel that costs under Rs 30,000 in Delhi could generate around 5,000 times more electrical energy in a year.)

The second physics challenge is to produce more energy than is used by the facility as a whole. NIF is far from meeting this challenge. It admitted that just the 192 lasers consumed around 400 megajoules in the process of blasting the pellet. To this, we have to add all the energy that goes into running the other equipment and the facility as a whole.

The final physics challenge is to produce more energy than what is required to construct the facility and all the equipment. In the case of the ITER experiment, for example, it has been estimated that “the tokamak itself will weigh as much as three Eiffel towers [and the] total weight of the central ITER facility is around 400,000 tons”. As Daniel Jassby, a retired physicist from the Princeton Plasma Physics Lab, put it, all this “must appear on the negative side of the energy accounting ledger”.

If these physics challenges are not met, of course, then one has a permanent loss-making facility in energy terms. NIF is far from meeting the latter challenges. An artist’s rendering shows a NIF target pellet inside a hohlraum capsule with laser beams entering through openings on either end. Photo: US Department of Energy, Public domain via Wikimedia Commons

The next stage can be called an “engineering challenge” and that revolves around the question: how do you convert this experimental set up that produces energy for a microscopic fraction of a second into a continuous source of electricity that operates 24 hours a day and 365 days per year? To do that, these fusion reactions should occur several times each second, each second of the day, each day of the year. As of now, the lasers can fire only once a day, at a single target. To move from that state to what is required will need an improvement by a factor of over 500,000 (assuming around six shots per second).

But it is not just firing the laser. Each of these explosions produces a large amount of debris, which would have to be cleared. And then a new pellet has to be placed with utmost precision at the very spot where the lasers can focus their beams.

If all of this is not trouble enough, there is fuel procurement. NIF uses a “gold cylinder with a frozen pellet of the hydrogen isotopes deuterium and tritium”. Deuterium and tritium are isotopes of hydrogen. Deuterium is quite common but tritium is very scarce, because it decays radioactively with a half-life of only around 12 years. Fusion proponents often talk about generating tritium in situ, but this is an exceedingly difficult task, as Jasby has explained.

Even if one were to adopt the approach of watching superhero movies and willingly suspend disbelief to assume that all these engineering challenges are solved, then there is an even more difficult challenge: to make this incredibly complicated process into an economically competitive way of generating electricity. If one goes by history, the last could be a killer as has been the case with nuclear fission power, which is a far easier process in comparison to fusion.

Thus, these advances can better be described as “micron-stones”, to coin a term, rather than milestones, and that too on a path that might never lead to economical electricity generation. In the meanwhile, this recent experiment is far more likely to be useful to nuclear weapons designers.

NIF’s chief purpose is not generating electricity or even finding a way to do so. NIF was set up as part of the Science Based Stockpile Stewardship Program, which was the ransom paid to the US nuclear weapons laboratories for forgoing the right to test after the United States signed the Comprehensive Test Ban Treaty. This is a purpose NIF can start fulfilling without ever generating any electricity.

The main utility that NIF offers nuclear weapons designers and planners is by providing a greater understanding of the underlying science. As the Lawrence Livermore National Laboratory’s webpage proudly proclaims:

“NIF’s high energy density and inertial confinement fusion experiments, coupled with the increasingly sophisticated simulations available from some of the world’s most powerful supercomputers, increase our understanding of weapon physics, including the properties and survivability of weapons-relevant materials”.

Another 1995 document explains that NIF would provide lots of “neutrons with the very short pulse widths characteristic of low-yield nuclear intercepts, that can be used to establish lethal criteria for chemical/biological agents and nuclear warhead targets”. In other words, NIF could help with modelling the use of nuclear weapons to destroy chemical, biological and nuclear weapons.

NIF might even help with developing new kinds of nuclear weapons. Back in 1998, Arjun Makhijani, who has a PhD in nuclear fusion, and Hisham Zeriffi suggested that NIF could help with the development of pure fusion weapons, i.e., thermonuclear weapons that do not need a nuclear fission primary. If that were to happen – and that is a big if, as is the case with most fusion activities – that would obviate the need for highly enriched uranium or plutonium, which are currently the main obstacles to making nuclear weapons.

NIF, then, is a way to continue investment into modernising nuclear weapons, albeit without explosive tests, and dressing it up as a means to produce “clean” energy. The managers of NIF and the larger laboratory in which it is housed are careful to highlight different promises based on the circumstance they are speaking at. When anthropologist Hugh Gusterson asked a senior official about the purpose of the laser programme, the official replied, “It depends who I’m talking to…One moment it’s an energy program, the next it’s a weapons programme. It just depends on the audience”.

The tremendous media attention paid to NIF and ignition amounts to a distraction – and a dangerous one at that.

As the history of nuclear fusion since the 1950s shows, this complicated technology is not going to produce cheap and reliable electricity to light bulbs or power computers anytime in the foreseeable future.

But nuclear fusion falls even shorter when we consider climate change, and the need to cut carbon emissions drastically and rapidly. The Intergovernmental Panel on Climate Change has warned that to stop irreversible damage from climate change, the world will have to achieve zero net emissions by 2050. Given this relatively short timeline to turn around our economies and ways of living, spending billions of dollars on this sure-to-fail attempt to develop fusion power only amounts to diverting money and resources away from proven and safer renewable energy sources and associated technologies. Investment in research and development into fusion is bad news for the climate.

In the meanwhile, nuclear fusion experiments like those at NIF will further the risk posed by the nuclear arsenal of the US, and, indirectly, the arsenals of the eight other countries known to possess nuclear weapons. The world has been lucky so far to avoid nuclear war. But this luck will not hold up forever. We need nuclear weapons abolition, but programmes like NIF offer nuclear weapons modernisation, which is just a means to assure destruction forever.

M.V. Ramana is the Simons Chair in Disarmament, Global and Human Security and Professor at the School of Public Policy and Global Affairs, University of British Columbia, Vancouver, Canada, and the author of The Power Of Promise: Examining Nuclear Energy In India.