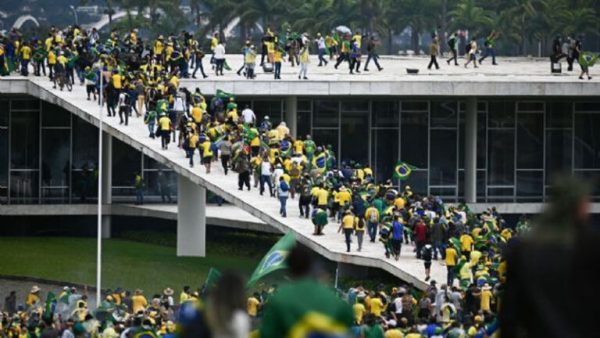 On the 8th of this month, a week after the inauguration of President Lula da Silva, an event took place in Brasília that only took by surprise those who did not want to know, or had no way of knowing, about its widely disseminated preparation on social networks. The violent occupation of the buildings of the legislative, executive, and judicial authorities and the surrounding spaces, as well as the depredation of public goods existing in these buildings by far-right demonstrators, constitute acts of terrorism planned and thoroughly organized by their leaders. It is, therefore, an event that seriously calls into question the survival of Brazilian democracy; given the way it occurred, it may well threaten tomorrow other democracies on the continent and in the world. Thus, it needs to be examined according to the importance it has. Its key features and the lessons to draw are as follows:

1. The far-right movement is global; its actions at the national level benefit from foreign anti-democratic experiences and often act in alliance with them. The articulation of the Brazilian far right with the American far right is known. The well-known spokesman of the latter, Steve Bannon, is a personal friend of the Bolsonaro family and has been a tutelary figure of the Brazilian far right since 2013. In addition to alliances, the experiences of one country serve as a reference to another country and constitute an apprenticeship. The invasion of the Three Powers Square in Brasília is an “improved” copy of the Invasion of the Capitol in Washington D. C. on January 6, 2021; it learned from it and tried to do better. It was organized in more detail, sought to bring many more people to Brasília, and used various strategies to make democratic public security feel reassured that nothing abnormal would happen. The leaders aimed to occupy Brasília with at least one million people, create chaos, and remain as long as necessary to allow military intervention to end democratic institutions.

2. Such events are presented as credible, spontaneous movements. On the contrary, they are carefully organized and have deep ramifications in society. In the Brazilian case, the invasion of Brasília was organized from different cities and regions of the country; in each of them there were leaders identified with a telephone number to be contacted by the adherents. Participation could have many forms. Those who could not travel to Brasília, had missions to fulfill in their localities, blocking fuel circulation and supermarket supply. The aim was to create chaos through the lack of essential products. Some will remember the fuel trucking strikes that precipitated the fall of Salvador Allende and the end of Chilean democracy in September 1973. In fact, chaos in Brasília had precise objectives. The strategy room of the Office of Institutional Security, located in the basement of the Planalto Palace, was raided, confidential documents and ultra-technological weaponry were stolen, which shows that there was previous training and espionage. Five grenades were also found in the Supreme Court and the National Congress.

3. In democratic countries the strategy of the extreme right is based on two pillars: (I) investing heavily in social networks to win elections with the aim of, once in power, not using power democratically or leaving power democratically. So it happened with Donald Trump and with Jair Bolsosonaro as presidents. (II) In the event that you do not anticipate winning, start questioning the validity of the elections early on and declare that you do not accept any other result than your own victory. The minimum program is to lose by a small margin to make the idea of electoral fraud more credible. It was so in the last elections in the USA and in Brazil.

4. To succeed, this frontal attack on democracy needs to have the support of strategic allies, both domestic and foreign. In the case of national support, the allies are anti-democratic forces, both civilian and military, installed in the apparatus of government and public administration which, by action or omission, facilitate the actions of the rebels. In the Brazilian case, the connivance, passivity, if not even complicity of the security forces of the Federal District of Brasília and its leaders is particularly clamorous. With the aggravating factor that this administrative region, being the headquarters of political power, receives huge federal revenues for the specific purpose of defending the institutions. It is also scandalous that the Brazilian Armed Forces remained silent, especially when it was known that the purpose of the organizers was to create chaos to provoke their intervention. On the other hand, the Armed Forces tolerated that protesters set up camps in front of the barracks, a military security area, and remained there for two months. This is how the idea of the coup thrived in social networks. In this case, the contrast with the US is stark. When the Capitol was invaded, the US military chiefs made a point of stressing their defense of democracy.  In this sense, the appointment of the new Defense Minister, José Múcio Monteiro, who seems bent on a good and reverential relationship with the military, does not bode well. After all that has happened, he is a problematic minister. Brazil is paying a high price for not punishing the crimes and perpetrators of the military dictatorship (1964-1985), particularly considering that such crimes have not yet expired. This allowed former President Bolsonaro to praise the dictatorship, honor military torturers, and appoint military personnel to important positions of a civilian and democratic government, some strongly committed to the dictatorship. This is the only reason why there is talk today about the danger of a military coup in Brazil, but not in Chile or Argentina. As is well known, in these two countries those responsible for the crimes of the military dictatorship were tried and punished.

5. In addition to national allies, foreign allies are crucial. Tragically, on the Latin American continent, the US has traditionally been the great ally of dictators, when not even the instigators of coups against democracy. It turns out that, this time, the U.S. was on the side of democracy and it made all the difference in the case of Brazil. I am convinced that if the US had given the usual signs of encouragement to would-be dictators, we would be facing a consummate coup today. Unfortunately, in light of a history of more than a hundred years, this US position is not due to a sudden zeal for the internationalist defense of democracy. The U.S. position was strictly determined for internal reasons. To support the far-right Bolsonarism in Brazil was to give strength to the far-right American Trumpist who continues to believe that the election of Joe Biden was the result of electoral fraud and that Donald Trump will be the next President of the United States. In fact, I predict that maintaining a strong far right in Brazil will be important for the designs of the American far right in the 2024 elections. The idea is to create such a situation of ungovernability that it will make it as difficult as possible for President Lula da Silva to govern in the coming years. For this not to happen, it is necessary that coup supporters and predators be fully punished. And not only them but also their principals and funders.

6. In order to ensure the sustainability of the extreme right, it is necessary to have a social base, to have funding-organizers, and an ideology strong enough to create a parallel reality. In the case of Brazil, the social base is broad, given the exclusionary nature of Brazilian democracy that makes large sectors of society feel abandoned by democratic politicians. Brazil is a society with great socio-economic inequality aggravated by racial and sexual discrimination. The democratic system enhances all this to the point that the Brazilian Congress is more a cruel caricature than a faithful representation of the Brazilian people. If it is not subject to profound political reform, it will be totally dysfunctional in the long term. Under these conditions, there is a wide recruitment field for far-right mobilizations. Obviously, the vast majority of the participants are not fascists. They just want to live with dignity and no longer believe that this is possible in a democracy.

The funding-organizers seem to be, in the case of Brazil, sectors of low industrial, agrarian, armament, and services capital that have benefited from Bolsonorista (non)governance or with whose ideology they most identify. As far as ideology is concerned, it seems to be based on three main pillars. First, the recycling of the old fascist ideology, that is, the reactionary reading of the values of God, Homeland, and Family, to which Liberty has now been added. It is mainly a question of unconditionally defending private property in order to (1) be able to invade and occupy public or community property (indigenous territories), (2) effectively defend property, which implies arming the proprietary classes, (3) having legitimacy to reject any environmental policy, and (4) reject reproductive and sexuality rights, in particular the right to abortion and the rights of the LGBTIQ+ population. Secondly, ideology implies the need to create enemies to destroy. Enemies are of different kinds, but the most global (and abstract) is communism. Forty years after the regimes and parties advocating the establishment of communist societies have disappeared, this remains the most abstract and most real ghost, at least in the Western Hemisphere. To understand this, it is necessary to take into account the third pillar of the ideology of the extreme right: the incessant and spread out creation in the social fabric of a parallel reality, immune to the confrontation with real reality, carried out by social networks and reactionary religions (neo-Pentecostal evangelical churches and catholic anti-Pope Francis) that easily link communism and abortion and thus instigate abyssal fear in defenseless populations. The whole process is facilitated by the fact that such populations have long since lost hope of having a dignified life.

The attempted coup in Brazil is a warning to navigation. Brazilian, Latin American, North American, and worldwide democrats must take this warning very seriously. If they do not, tomorrow the fascists will not just knock on the door. They will certainly break it down without asking permission.

Boaventura de Sousa Santos is the emeritus professor of sociology at the University of Coimbra in Portugal. His most recent book is Decolonizing the University: The Challenge of Deep Cognitive Justice.

Brazil: Between Democracy and an Ongoing Coup

Ukraine Is A Wake-up Call For Europe

Ukraine Is a Wake-Up Call for Europe

The West is Experiencing a Contraction of its Power, Not Necessarily its Decline

A US Future for Europe?

The contraction of the West

Why Won’t Europe Call for an End to This War?

Is Europe Sleepwalking Into Another World War?