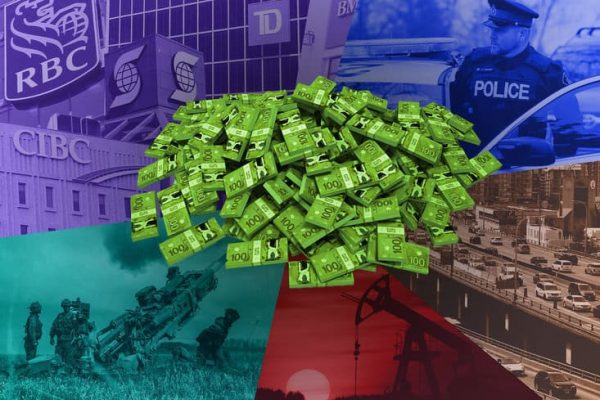 These days, anyone proposing ambitious new social programs—not to mention a generation-defining agenda like the Green New Deal—is bound to be met with a particular refrain of concern-trolling: “but how are you gonna pay for it?”

The most effective way to combat this is to point to tangible and truly giant expenditures that actively harm our communities—and which too often remain politically invisible.

For decades, Canadian neoliberalism has ushered in an era of austerity, but the impacts haven’t landed equally. We’ve seen budget cuts for working people and the environment—borne most disproportionately by Black, Indigenous, and other racialized people and communities that are made vulnerable in our society. On the other hand, fossil fuel companies, the military, police, large corporations, and the wealthiest families have all actually received more support from the government.

We have starved public goods, land, and life in order to feed Big Oil, corporate profits, and the security that capitalist growth requires.

But there are plenty of options to pay for a new direction: taxes on high earners and polluting firms, cutting military expenditure, long-term investment in green infrastructure, to name a few. The real issue is political will and political power.

The money is there — we just need to seize it

Just think about the impressive government policies put in place in the span of weeks when the COVID-19 pandemic first hit. This crisis has shown us that, when it comes down to it, the money and policy tools are there. And it is worth pointing out to anyone who asks this question that what we do not spend on climate action, adaptation, and upholding Indigenous sovereignty today will make this work much more expensive later on.

Including the large flows of public money as part of what’s up for debate helps to open up an accessible and potentially transformative conversation about what we could build instead. By asking tangibly what it would look like for the police to have less power over our communities—and particularly Black and Indigenous communities—we can start a public conversation about imagining and building a truly safe world.

The “refund” part of this strategy would include supporting many solutions, from universal public transit, to direct Treaty-based funding for Indigenous Nations, to affordable energy-efficient public housing, to community-owned renewable energy, to Canada forgiving illegitimate debts and paying reparations abroad to make space for a globally just transition.

The exact demands can and should be made more specific to communities as they organize. In most of these cases, as we phase out funding for programs that are not serving communities, there are also other programs that will need to be built up at the same time. For example, we need mental health support and public housing alongside the defunding of police and prisons, as many abolitionist groups like Movement for Black Lives and The Red Nation have sketched in more detail.

The following is a non-exhaustive list of $180 billion a year in public money in Canada that could be cut, shifted, and phased out to lessen harm and free up both money and the public imagination towards a decolonial and just transition.

Winning even one-quarter of this amount in the next few years would free up more than five times what the federal government was planning to spend each year on climate- related infrastructure and programs as of 2021.

These figures are taken from a 2017 to 2019 average where possible to avoid potential anomalies in government spending during the beginning of the COVID-19 pandemic. For context, in 2019 the federal, provincial, and municipal governments together spent a total of $750 billion a year.

How will we pay for it?

Policing, prisons, and border security prop up a warped and structurally racist interpretation of safety and security. Many of them actively block a just transition, as with the criminalization of land defenders. Shifting this funding and winding down policing and prisons would go hand in hand with building new systems of safety and security that truly serve the public.

It costs $22 billion a year to operate Canada’s military. There are also large capital purchases like the estimated $19 billion for fighter jets Trudeau recently decided to buy. Clawing back this spending will free up a wasteful use of resources and allow for self-determination of not just Indigenous Nations within Canada’s borders but also all nations and peoples outside of it.

As with defunding the police, phasing out military spending means re-envisioning safety and security and building up new public programs that truly deliver it. It also means working with other nations towards equitable, peaceful international relations.

The government’s financial support for the fossil fuel sector in Canada is huge and is prolonging the fossil fuel era—allowing new oil and gas projects to be built that otherwise would not see the light of day. The “direct subsidies” here include the average of known tax breaks and direct transfers for specific programs and projects for years 2017–2019. The “public finance” bucket is almost all preferential loans or guarantees through Export Development Canada, which also means liability for any projects that become stranded assets will be held by the public.

Subsidy totals fluctuate greatly year to year due to commodity prices and one-off programs, and it is important to note there are also large portions of subsidies, including tariff exemptions and clean-up costs, that are easily and frequently avoided by companies, where there is not enough public information to calculate them. These figures do not capture some large new subsidies since 2020 like Alberta’s finance for Keystone XL or the new CCUS tax credit.

Taxing the rich and corporations: $98 billion

The top 1 percent of people hold almost 26 percent of wealth in Canada, and this imbalance got worse during the pandemic. The $98 billion here comes from a tax on extreme wealth starting at 1 percent on net worth above $10 million. Alex Hemingway at the CCPA estimates in an article for The Breach this would raise $36 billion a year. There’s also inheritance taxes, increased corporate taxes, closing tax breaks on investment income, and measures to make it harder to use tax havens (estimated at $62 billion a year by Canadians for Tax Fairness).

Corporations and the rich have awful amounts of resources to throw at avoiding their money being redistributed, paying accountants and lawyers to help them avoid and evade taxes. So, it will take time and focused effort to build the political and regulatory power to adequately redistribute resources from corporations and the rich. We use moderate estimates here to estimate what might be possible in the near term. Others have rightly proposed higher rates of taxation as well as ceilings on maximum wealth, after which everything is expropriated.

To reach the numbers in this section, we used averages from before the pandemic to reflect what might be possible in a “normal” year, but it is now clear there is no going back to normal. Corporate profiteering off of the pandemic and high energy prices have ballooned, and so these proposals to raise taxes on the rich and corporations would raise well over $98 billion per year (for now at least).

As working people feel the dire effects of this greed, calls for one-time excess profits taxes on oil and gas or on corporations as a whole are gaining momentum. These are welcome proposals, but our ultimate goal must be to win more permanent redistributive measures.

Building new highways increases our dependency on individual passenger vehicles and is not even effective at decreasing congestion. It is also a huge public health hazard for air pollution and traffic accidents. Similarly, government handouts and preferential loans to airports, airline companies, and aircraft manufacturers are locking us into this fossil-intensive sector instead of building long-distance public transit and other options to reduce the need for flights.

The public spending is often project-based and not well documented as a yearly average, so this is a likely underestimate based on 2020 and 2021 data in the Energy Policy Tracker, a coalition research project our co-author Bronwen Tucker worked on that is led by the International Institute for Sustainable Development.

Some “Defund—Refund” wins have already come as a result of the historic widespread support of the Black Lives Matter movement in 2020. Twenty US cities saw successful organizing in 2020 to shrink police budgets by a combined $840 million a year, with at least $160 million shifted to community supports like mobile mental health teams, affordable housing, eviction protection, youth jobs programs, and increasing the minimum wage for precarious city workers.

In the Philippines, Indonesia, Ghana, and Morocco, governments have phased out some fossil fuel subsidies and used the available funds for cash transfers and social supports like education and health insurance for low-income households.

These small shifts are previews of what stronger social movements could win.

This is an edited excerpt from The End of This World: Climate Justice in So-Called Canada by Angele Alook, Emily Eaton, David Gray-Donald, Joël Laforest, Crystal Lameman and Bronwen Tucker, published by Between the Lines.