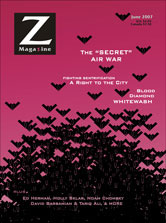 Z is an independent monthly magazine dedicated to resisting injustice, defending against repression, and creating liberty. It sees the racial, gender, class, and political dimensions of personal life as fundamental to understanding and improving contemporary circumstances; and it aims to assist activist efforts for a better future. Find out how you can help Z.

Z Magazine was founded in 1987, by two of the cofounders of South End Press. The name was inspired by the movie Z, directed by Costa-Gavras, that tells the story of repression and resistance in Greece. Comrade Z (a leader of the resistance) has been assassinated and his killers, including the chief of police, are indicted. Instead of the expected positive outcome, the prosecutor mysteriously disappears and a right-wing military junta takes over. The security police set out to prevent “a mildew of the mind,” an infiltration of “isms” or “spots on the sun.”

As the closing credits roll, instead of listing the cast and crew, the filmmakers list the things banned by the junta. They include: peace movements, labor unions, long hair on men, Sophocles, Tolstoy, Aeschylus, strikes, Socrates, Ionesco, Sartre, the Beatles, Chekhov, Mark Twain, the bar association, sociology, Becket, the International Encyclopedia, the free press,modern and popular music, the new math, and the letter Z, which has been scrawled on the sidewalk as the film’s final image, symbolizing “the spirit of resistance lives.”