The Greens Are in Government, but Environmentalists Are ‘Criminals’ 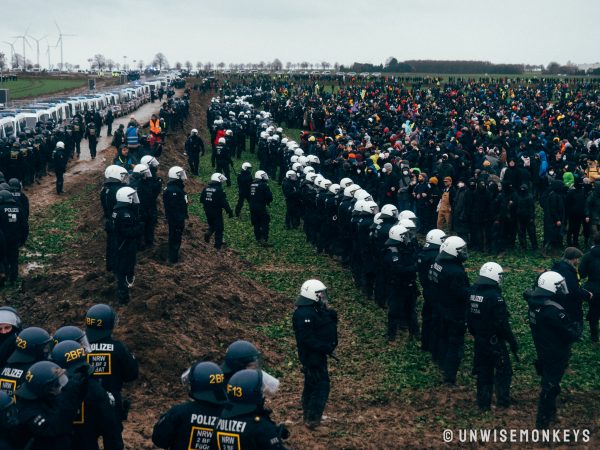 Lützerath, the name of a small farming village in Nordrhein-Westfalen, will remain in the political memory of the German Republic for a long time. And not just because of the not-entirely-peaceful clashes that are taking place these days between the activists, who are occupying it and intend to defend it to the bitter end, and a massive police deployment tasked with clearing the village at any cost, so that it can be demolished and make room for the expansion of the already enormous coal mine owned by the energy giant RWE.

It is not easy to explain how and why, in a country where the Greens are part of the federal government in a position of the highest importance, and in a state where they’re in the local government (but here together with the Christian Democrat CDU), they are supporting police eviction and increased mining exploitation, among the most harmful activities for climate change. For a long time, the Greens have been proponents of a form of “political realism” that becomes hard to separate from a vocation for being in government which seems to take precedence over every other consideration, and now they are claiming credit for securing an early exit from the use of coal energy in exchange for the extension of the Lützerath hole.

The party leadership says this is a very good compromise. But the fact of the matter is that, beyond commitments for the future, which are always made-up numbers that get suspended due to this or that crisis factor, the immediate political signal that is being sent is in a radically opposite direction to any avenue to fight climate change and land devastation, let alone one marked by environmentalist sensibilities. A decision that is all the more incomprehensible after the verdict of several research centers, which confirmed the complete uselessness of an expansion of mining in the Rhine region for the country’s energy needs.

Russia’s invasion of Ukraine has dealt a good hand to the lords of fossil fuels and nuclear power, so that one cannot rule out that, when the war is over, Russia itself might reap benefits when it puts its enormous fossil fuel deposits back into play. Moreover, against the backdrop of the conflict, the German Greens had already been converted to supporters of Germany’s massive rearmament and its stratospheric cost, both symbolic and financial.

The Greens are a moderate, centrist party, reluctant to pander to any eruption of social conflict and more than cautious in its dealings with big business interests, and it was inevitable that they would end up on a collision course with the environmentalist and pacifist movements, not to mention the much-maligned Last Generation, as well as with its own youth organization, which is siding with the occupiers in Lützerath (a phenomenon that also happened to the SPD in the 1960s, with the secession of the SDS). This place now symbolizes a great paradox, and the number one reason for it to be demolished is in order to reestablish a political order of priorities that would push the climate crisis far away in the background, so cosmically dark and unreachable that it could be kept hidden from view whenever convenient.

In any case, the eviction of Lützerath is not an easy matter that can be resolved in hours or days. The occupiers, barricaded in huts built in trees, on rooftops and in attics, have organized themselves so as to remain as long as possible in the eye of public opinion, which has little sympathy for the coal giant. As time goes on, it is likely that the confrontation will tend to escalate, and so will the tensions between parties, institutions and movements, with all their repressive consequences.

There has been no shortage of warnings, and for weeks now some have ranted about the supposed birth of a “Green RAF.” Since 1991, a group of intellectuals and linguists at Philipps University in Marburg has been choosing, from thousands of crowdsourced proposals, the “Unwort of the Year,” that is, the “non-word” or the “unworthy” word, malignantly lacking in meaning, as we might roughly translate it. For 2022, the dubious honor has gone to the word Klimaterroristen (“climate terrorists”), a label often slapped onto Last Generation activists, and one that combines complete nonsense (who is actually being terrorized, and how?) with an obvious intent to “criminalize nonviolent protests, civil disobedience and democratic resistance” (according to the rationale of those who awarded the distinction), which is practiced by movements fighting against a development model that is now generally deemed unsustainable.

In every way, it’s an awkward attempt to discredit the noble – while somewhat utopian – aims of environmentalism by juxtaposing them with the (imaginary) illegality and violence of the means used to further them. However, this framing has shown little propensity to sway public opinion. The demolition of Lützerath is proving to be a major misstep, a definitive blow to the already discredited “diversity” of the Greens (with likely repercussions on the upcoming Berlin elections), and ultimately a caving in to RWE’s profit motives rather than a necessary support for the country’s energy needs.