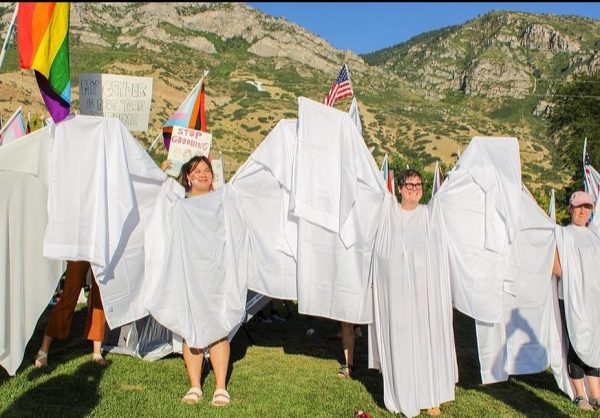 On the first day of school at Norman High School last month, English teacher Summer Boismier covered up her classroom bookshelves with paper that said “Books the state doesn’t want you to read.”

The coverings were a response to Oklahoma’s HB 1775, a state law enacted in May that restricts what educators can say about race and gender. She also posted a QR code leading students to Brooklyn Public Library’s Books Unbanned Project, which allows young people free access to books that might be restricted in their schools.

“We’re being forced into — to use a banned book reference — a catch-22,” said Boismier, who resigned after a parent complained about her teaching. “It’s either your paycheck or your principles.”

Across the country, as students of all ages and educators return to the classroom, they’ve been fighting back against the unprecedented assault on antiracist and LGBTQ-inclusive teaching.

Oklahoma isn’t the only state attempting to curb classroom conversations and resources around race, gender and sexuality. According to PEN America, school districts in 26 states have banned or opened investigations into more than 1,100 books in the past nine months alone.

“These laws are silencing many of these important conversations, chilling speech and restricting student access to these identity-affirming texts,” said Boismier, who has had to leave her home after experiencing harassment and threats for her outspoken opposition to HB 1775.

“We have state leadership who are describing stories centering marginalized communities, specifically associated with race and gender, as obscene or pornographic,” Boismier said. “I cannot imagine what it must be like for a student in one of these communities to hear an individual in the highest office in the state refer to their stories — their experiences — as obscenity.”

In several schools and universities, the attacks on antiracist and LGBTQ-inclusive education go beyond book bans.

In Texas this week, around 100 students at Grapevine High School walked out of class over new district policies targeting the LGBTQ community.

At Brigham Young University, a dozen counter-protesters dressed as angels to shield queer community members from hundreds of anti-LGBTQ protesters during a back to school pride night in Provo, Utah.

Maddison Tenney — a senior at BYU and founder of the Raynbow Collective, which supports LGBTQ students at the university — came up with the idea for the angel counter-protests after watching a TikTok video of the ‘angels’ who showed up against anti-LGBTQ protesters during the trials of Matthew Shepard’s killers.

“I knew this was what we had to do — this is how we show that there are more people with us than against us,” Tenney said. “And, to make a statement about the power of religion and the queer community, and to show that it can’t be weaponized to hurt us anymore.”

Jaliah Jambalaya, a local student and drag queen who organized and performed at the event, was touched by the outpouring of support from other community members and allies. Drag performers at the event were the primary targets of the far-right protesters, as part of a broader series of attacks and protests against drag across the country.

“I’ve only been out of the closet for a year and a half, so seeing those people put themselves between me and the people that hate me meant a lot to me,” Jambalaya said. “I never thought somebody would do that for me growing up.”

Meanwhile, students at Central High School in Pennsylvania returned to school with a victory. Last fall, members of the school’s Panther Anti-Racist Student Union, or PARU, successfully forced district leaders to reverse a decision to ban a list of antiracist resources and literature, built to educate teachers and students about Black history.

The reversal came after students and teachers organized deliberate and targeted walk-outs at the school, which attracted media attention and put pressure on administrators. It’s a strategy that Ben Hodge, a teacher and faculty advisor for PARU, hopes that other teachers and students can replicate as they struggle against their own book bans across the country.

“I would encourage educators and students who are dealing with book bans and legislation to stay the course and not give up,” Hodge said. “Connect with other people, find your support, and rally together — we are so much stronger together.”

As Students Go Back to School, Staff Strike for Better Pay and Conditions

From LA to Tennessee, unhoused activists and supporters are fighting a wave of anti-homeless legislation

From LA to Tennessee, unhoused activists and supporters are fighting a wave of anti-homeless legislation

Hundreds of California Farmworkers Are Marching for Union Voting Rights

In Atlanta, plan for ‘Cop City’ sparks a web of resistance