Prosecution of Assange Would Lead to End of the First Amendment, Advocates Warn 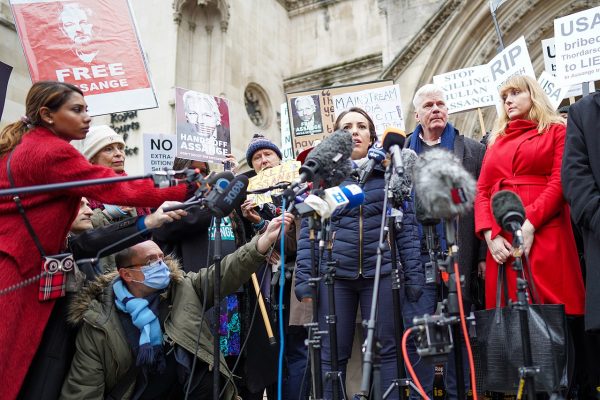 “Every empire requires secrecy to cloak its acts of violence that maintain it as an empire,” Ellsberg testified during the Belmarsh Tribunal held on January 20 at the National Press Club in Washington, D.C. The tribunal is named after London’s high-security Belmarsh Prison, where Assange has been held for nearly four years, fighting extradition to the United States. The Belmarsh Tribunal, inspired by the Russell-Sartre tribunal of the Vietnam War, was sponsored by Democracy Now!, Defending Rights & Dissent, Courage Foundation, DiEM25, The Intercept, The Nation and PEN International.

Assange is charged with violations of the Espionage Act for exposing evidence of U.S. war crimes and faces 175 years in prison if convicted.

Freedom of the Press Is at Stake

Former British Labour Party leader Jeremy Corbyn explained that if Assange is sentenced to life in a maximum-security prison in the United States, it will have a chilling effect on journalists. Corbyn said that every journalist throughout the world will think, “Oh, should I really report this information I’ve been given? Should I really speak out about this denial of human rights, a miscarriage of justice in any country around the world? Because the long arm of the United States [Espionage Act] might reach me and an extradition treaty might put me in that same prison.”

Philosopher, author and political activist Srećko Horvat, co-chair of the Tribunal, noted that the U.S. government “is nominally advocating freedom of press, but at the same time continues the persecution of a publisher — Julian Assange.”

When Biden was running for president in 2020, he declared on World Press Freedom Day, “We all stand in solidarity” with the 360 journalists imprisoned worldwide “for their work in journalism.” Biden quoted Thomas Jefferson’s 1786 statement, “Our liberty depends on the freedom of the press, and that cannot be limited without being lost.”

Since Biden’s election, however, his administration has refused to dismiss the charges Donald Trump brought against Assange. Biden ignored the fact that the Obama-Biden administration, which prosecuted more whistleblowers under the Espionage Act than all its predecessors combined, refused to indict Assange because of “the New York Times problem.” If they charged Assange, the Obama administration reasoned, they would have to charge The New York Times and other media outlets that also published classified military and diplomatic secrets.

Horvat said, “Every country has secrecy laws. Some countries have very draconian secrecy laws. If those countries tried to extradite New York Times reporters and publishers to those countries for publishing their secrets we would cry foul and rightly so. Does this administration want to be the first to establish the global precedent that countries can demand the extradition of foreign reporters and publishers for violating their own laws?”

On November 28, 2022, The New York Times, the Guardian, Le Monde, DER SPIEGEL and El País signed a joint open letter calling on the Biden administration to drop the Espionage Act charges against Assange. “Publishing is not a crime,” they wrote, noting that Assange is the first publisher to be charged under the Espionage Act for revealing government secrets.

In 2010, the five signatories to the open letter collaborated with WikiLeaks to publish “Cable gate” — 251,000 confidential U.S. State Department cables that “disclosed corruption, diplomatic scandals and spy affairs on an international scale.” The documents, according to The New York Times, revealed “the unvarnished story of how the government makes its biggest decisions, the decisions that cost the country most heavily in lives and money.”

Assange’s indictment also stems from WikiLeaks’s revelation of the Iraq War Logs — 400,000 field reports that chronicled 15,000 unreported deaths of Iraqi civilians, and systematic rape, torture and murder after U.S. forces “handed over detainees to a notorious Iraqi torture squad.” And the indictment covered the Afghan War Diary — 91,000 reports of larger numbers of civilian casualties by coalition forces than the U.S. military had reported.

The most notorious release by WikiLeaks was the 2007 “Collateral Murder” video, which showed a U.S. Army Apache attack helicopter target and kill 11 unarmed civilians, including two Reuters news staff and a man who came to rescue the wounded. Two children were injured. The video clip reveals evidence of three violations of the Geneva Conventions and the U.S. Army Field Manual.

Amy Goodman, co-host of Democracy Now! and the Tribunal’s other co-chair, said that the events depicted in the Collateral Murder video “would never have happened” if the Iraq War Logs had been made public six months before. “An investigation would have been launched,” Goodman speculated. “That’s why freedom of the press, the free flow of information, saves lives.” She said that it is not just freedom of the press at stake in Assange’s prosecution, but also the public’s right of access to information. Ironically, Assange first screened the Collateral Murder video at the National Press Club more than a decade ago.

But, as Ben Wizner, director of the ACLU Speech, Privacy and Technology Project and Edward Snowden’s lead attorney, noted, “No government will voluntarily disclose its own crimes. For that, we need brave sources who have firsthand evidence, and we need a free press and brave publishers who are willing to bring this information to the people, to whom it belongs.”

The Espionage Act Should Be Repealed

“The Espionage Act should be stricken from the books,” public intellectual Noam Chomsky testified. “It has no place in a free and democratic society. We should not be surprised that the Act is now being used to punish the exercise of journalism.”

Other witnesses echoed Chomsky’s critique of the Espionage Act. Attorney Jesselyn Radack, who has defended most of the whistleblowers investigated and charged under the Act, said, “Defendants cannot get a fair trial under the Espionage Act. These cases are plagued by secrecy and defined by their Kafkaesque features.”

“It is virtually impossible to defend against the Espionage Act,” attorney Jeffrey Sterling, a former CIA clandestine officer falsely accused of violating the Act by leaking information to a journalist, said. “Truth is no defense. In fact, any defense related to truth will be prohibited.” Sterling observed that Assange “won’t have access to any of the so-called evidence used against him.”

Moreover, Sterling noted, “The Espionage Act has not been used to fight espionage. It’s being used against whistleblowers and Julian Assange to keep the public ignorant of [the government’s] wrongdoings and illegalities in order to maintain its hold on authority, all in the name of national security.”

Chip Gibbons, policy director of Defending Rights & Dissent, concurred. “Make no mistake, this attempt to jail Assange is part of a larger effort to silence those who expose the crimes of empire, militarism, and the U.S. national security state,” he testified. “Assange is a journalist and publisher, not a whistleblower or a source, but the normalization of the use of the Espionage Act against whistleblowers paved the way for Assange’s unprecedented indictment.”

Journalists “Create the Footnotes of History”

“Journalists are the most important people . . . because they create the footnotes of history,” activist writer Suchitra Vijayan told the tribunal. “Lies start wars and silence enables impunity,” she said. “Assange is a political prisoner and a dissident of the West. His crime — exposing brutal acts of violence, abuse of power, and crimes against innocent civilians.”

John Shipton, Assange’s father, denounced the “ceaseless malicious abuse” of his son while confined in the U.K. Shipton said the conduct of Assange’s case is “an embarrassment” that has undermined the U.K.’s claim to respect freedom of speech and the rule of law.

Assange is appealing the U.K. Home Office’s extradition order to the High Court of Justice, arguing that he would be extradited for a political offense in violation of the U.S.-U.K. extradition treaty. As WikiLeaks editor-in-chief Kristinn Hrafnsson said at the tribunal, “Not only is espionage a pure form of political offense, but the indictment against Julian Assange is littered with accusations of political motives.”

Marjorie Cohn is professor emerita at Thomas Jefferson School of Law, former president of the National Lawyers Guild, and a member of the national advisory boards of Assange Defense and Veterans For Peace, and the bureau of the International Association of Democratic Lawyers. Her books include Drones and Targeted Killing: Legal, Moral and Geopolitical Issues. She is co-host of “Law and Disorder” radio.

Marjorie Cohn is professor emerita at Thomas Jefferson School of Law, former president of the National Lawyers Guild, and a member of the national advisory boards of Assange Defense and Veterans For Peace, and the bureau of the International Association of Democratic Lawyers. A prominent scholar and lecturer, her books include Cowboy Republic: Six Ways the Bush Gang Has Defied the Law; and Drones and Targeted Killing: Legal, Moral and Geopolitical Issues She provides commentary for local, regional, national and international media and is co-host of “Law and Disorder” radio.

The Supreme Court Is About to Eviscerate the Right to Strike

After 41 Years in Prison, Mumia Abu-Jamal May Finally Get a Chance for New Trial

“Publishing Is Not a Crime”: The New York Times Joins the Fight to Free Assange