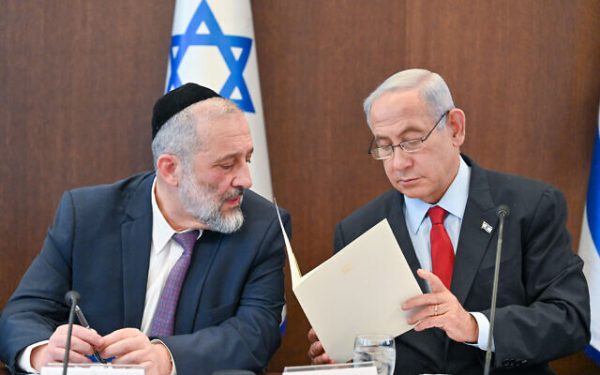 Carrie Keller-Lynn at The Times of Israel reports that at Sunday’s Cabinet meeting, Prime Minister Binyamin Netanyahu was forced to fire his minister of health and the Interior, Aryeh Makhlouf Deri, who heads up the ultra-right-wing Shas Party.

The move was forced on Netanyahu by Israel’s Supreme Court, which holds Deri to be unfit for office because of a string of tax evasion and bribery convictions. Initially it appeared that Deri and Netanyahu might attempt to defy the court, but on Sunday Netanyahu blinked.

Netanyahu, despite his slim majority in parliament, is under heavy pressure from several quarters. Chen Maanit at Haaretz reports that Gali Baharav-Miara, Israel’s attorney general, is considering declaring Netanyahu himself unfit for office while he is on trial for corruption, because of conflicts of interest.

Netanyahu and Deri are still attempting to find a way to keep Deri in cabinet meetings, Keller-Lynn reports. Deri was also deputy prime minister, a ceremonial post that he will attempt to retain, and which would allow him to be present at cabinet meetings as an observer. It is unclear whether the Supreme Court will accept this workaround. Deri also vowed to continue as Shas leader in parliament and to represent the party in caucuses on the floor even in the absence of ministerial rank. Again, it is not clear that the Supreme Court will allow it. Shas, which represents ultra-Orthodox fundamentalist Jews from Sephardic and Mizrahi backgrounds (mostly Middle Easterners rather than Europeans like Netanyahu), holds 11 seats in parliament and is pivotal to Netanyahu’s majority in the Knesset or parliament, which has 120 seats.

At his 2022 conviction for tax fraud, the court maintains that Deri pledged to retire from politics so as to avoid jail time and being slapped with a 7-year ban on political activity. Keller-Lynn reports that Deri is now denying that he made any such offer. He is depending on his party having attracted, he alleges, 400,000 votes, which he says outweighs the outrage of the Supreme Court.

One of Netanyahu’s priorities is what he characterizes as judicial reform but is actually a fatal weakening of the power of Israeli courts. He wants the judges and justices to be appointed by the prime minister and wants to allow parliament to override a Supreme Court judgement that a law or measure is unconstitutional by a simple majority. Presently, Supreme Court justices are appointed by a Judicial Selection Committee made up of 3 justices of the Supreme Court, two cabinet members, two members of parliament and two members of the Bar Association.

Not only have hundreds of thousands of Israelis demonstrated against Netanyahu’s proposed legislative coup against the courts but he is coming under heavy pressure, as well, from other quarters. National Security Adviser Jake Sullivan recently met with Netanyahu and warned him, according to The Times of Israel, that the Biden administration and the liberal Democrats in Congress are disturbed by these plans and that “if there is harm to democratic values, it will make it difficult for us to offer unwavering and unhesitating support for Israel.”

Netanyahu seems undeterred, only saying that whatever changes are made will have broad support. This is dishonest, since he knows that he has a slim majority in parliament and that the proposals will be supported by that slim majority and likely by no one else.

Economists and former Bank of Israel officials are also warning that gutting the judiciary would harm investment and the Israeli economy. Investors like to be sure that the rules won’t suddenly be changed on them, while a simple majority vote of parliament can be mercurial.

Finally, Sullivan also pressured Netanyahu to shut down an illegal Israeli squatter settlement on the Palestinian West Bank, i.e. one that even Israel and the US government see as illegal. Netanyahu did so but that angered Bezalel Smotrich, head of the fascist and racist Religious Zionism bloc, so that Smotrich refused to attend Sunday’s cabinet meeting.

In reality, all squatting by the citizens of an occupying power in territory it occupies as a result of war is illegal in international law.

Juan R. I. Cole is Richard P. Mitchell Collegiate Professor of History at the University of Michigan. For three and a half decades, he has sought to put the relationship of the West and the Muslim world in historical context, and he has written widely about Egypt, Iran, Iraq, and South Asia. His books include Muhammad: Prophet of Peace Amid the Clash of Empires; The New Arabs: How the Millennial Generation is Changing the Middle East; Engaging the Muslim World; and Napoleon’s Egypt: Invading the Middle East.

Is Israel becoming a Middle East Dictatorship Under Netanyahu? 110,000 Rally against Gov’t

2023 Prediction: The 2 Major Headaches for U.S. Foreign Policy will be Israeli and Iranian Fundamentalism

Russia’s Ukraine War and Energy Crisis have Scared the World into Turbocharging adoption of Wind, Solar for Power

Iranians in 23 Provinces Join In National Strike, as Truckers, Shopkeepers Walk Out

At COP27, Lula puts Brazil at Forefront of Climate Battle