Governing by Obeying the People: Bolivia’s Politics of the Street 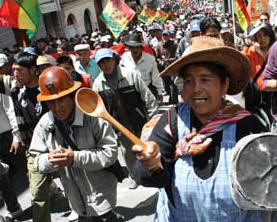 From across North Africa to Wisconsin, activists are navigating a new terrain of global protest and relationships with their governments. Whether in ousting old tyrants or dealing with new allies in office, the example of Bolivia holds many lessons for social movements. An illustrative dynamic is now unfolding in this Andean country where the movements hold sway over the government palace, and the leftist President Evo Morales says he "governs by obeying the people." But sometimes the people don't give him any other choice.

The day after Christmas last year, while Morales was away in Venezuela, Vice President Alvaro Garcia Linera announced that, as a way to cut government spending, subsidies on gas would be slashed, resulting in a roughly 73% price increase for Bolivians. In cash-strapped Bolivia, where much of the population lives below the poverty line, this austerity measure was to be born largely on the backs of the poor.

The neoliberal aspects of the policy shocked and outraged much of the country. Bolivian political commentator Rafael Bautista wrote that the gas price hikes followed the same neoliberal logic as Morales' rightwing predecessors, embracing the concept that "to have more money we must sacrifice those who never have anything…" Bautista continued, "but who establishes these prices? It's not the poor, it's the market." In this case the government was listening to the market over the people, and the price was to be paid with the "hunger of the poor."

The move also betrayed the decades-old social struggle to use natural resources for the benefit of the country. Bolivia has the largest natural gas reserves in South America, and Morales himself was ushered into office on a wave of protests demanding nationalization of gas and popular access to natural resources. He followed through with partial nationalization in 2006, and has met other campaign promises such as rewriting the constitution, expanding land reform and social services, and empowering indigenous communities.

Bolivia's social movements responded to the gas price hike announcement immediately, organizing protests, strikes and road blockades across the country to demand that the government back down. Even coca growers, Morales' staunch allies, set up road blockades on a major highway. Bus drivers went on strike, and community organizations in El Alto marched, attacking government buildings. It was a historically-broad rejection of the policy, with more than just the usual organizations and sectors heading into the streets.

In an effort to offset the increase in gas and food prices, the Morales government raised the wages of public employees by 20%. Yet the salary increase would not help workers in the private and massive informal sector. The government also offered assistance to farmers of rice, wheat and corn. Yet the gas prices and subsequent cost of food, basic goods and transportation continued to rise.

Finally, on December 31st, as the protests showed no sign of stopping, Morales relented, saying he would reverse the price increase. In a televised speech, he said he would "continue to govern by obeying the people.” (He was drawing from the phrase Mandar Obedeciendo, Lead by Obeying, a slogan used by the Zapatistas.)

Was he obeying the people, or was he simply forced to respond to their pressure? In either case, his move was significant; while politicians around the world have recently been responding to protests against austerity measures with tanks and bullets, Morales responded by (eventually) agreeing with protesters and backing down. This illustrates the autonomy of the Bolivian social movements and the power they have over the government.

For the last decade, social movements in Bolivia have been the protagonists of the country's history. This is because many of them understood that the fight for a better world didn't end with the ousting of former right wing President Gonzalo Sanchez de Lozada in 2003, or even with the election of Evo Morales in 2006. Their struggle required constant mobilization and social transformation that didn't fit into a government decree or a ballot box.

"I think we are reconsidering not just a new way of doing politics, but above all a new way of managing our economy," Bolivian activist leader Oscar Olivera said in a Latin American Solidarity Center interview on the recent gas conflict. "In this, it is the people who are making it possible."

Benjamin Dangl has worked as a journalist throughout Latin America and is the author of the new book, Dancing with Dynamite: Social Movements and States in Latin America(AK Press). For more information, visit DancingwithDynamite.com. Email Bendangl(at)gmail(dot)com

Ben studied writing and literature at Bard College and Latin American history and literature at the Universidad Nacional de Cuyo in Mendoza, Argentina. He is the author of the book The Price of Fire: Resource Wars and Social Movements in Bolivia (AK Press, 2007), which has been published in Spanish by Plural Editores in Bolivia and in Tamil by The New Century Publishing House in Tamil Nadu, India. Dangl is also a contributor to Taking Sides: Clashing Views on Latin American Issues (McGraw-Hill, 2006). Dangl has worked as a journalist covering politics and social issues in Latin America for over six years, writing for publications such as The Guardian Unlimited, The Nation Magazine, The Progressive, Utne Reader, CounterPunch, Alternet, Common Dreams, Z Magazine, La Estrella de Panama and dozens of other media outlets. He has received two Project Censored Awards from Sonoma University for his investigative reports on US government and military intervention in Latin America. Dangl has been interviewed on a variety of news programs including the BBC and Democracy Now!.Dangl teaches Latin American history and politics and globalization at Burlington College in Vermont. He is the founder and editor of Upside Down World, a publication on politics and social movements in Latin America, and works as the editor of Toward Freedom, a progressive perspective on world events.He has been a participant in various anti-war and anti-globalization movements in the US and elsewhere in the Americas. Dangl is also a member of the Burlington, VT Homebrewer's Co-op. writing at www.bendangl.net

On rituals and revolutions in the mines of Bolivia

The struggle for justice continues in post-coup Bolivia

Bibles at the Barricades: How the Right Seized Power in Bolivia

History at the Barricades

“The Worst Option is War”

The Staggering Cost of the War on Terror