Brazil and Argentina are making plans for a Latin American currency called the Sur, to “boost regional trade and reduce reliance on the US dollar”. Lula had pledged it while running for president.
By Benjamin NortonJanuary 23, 2023Z ArticleNo Comments4 Mins Read
Facebook Twitter Reddit Pinterest Tumblr Email
Source: Geopolitical Economy 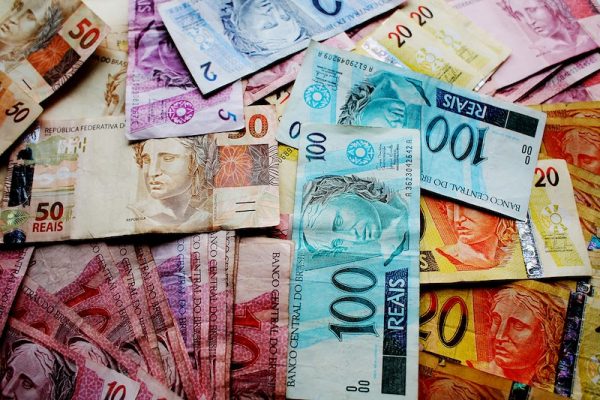 The governments of Brazil and Argentina are making plans to create a new currency for Latin America, called the Sur (“south” in English), according to a report in the Financial Times.

Other countries in the region will be invited to use the currency.

Their goal is to “boost regional trade and reduce reliance on the US dollar”, the newspaper noted, citing government officials.

Argentina’s Economic Minister Sergio Massa told the Financial Times that the South American nations will soon “start studying the parameters needed for a common currency, which includes everything from fiscal issues to the size of the economy and the role of central banks”.

Massa said they are preparing “a study of mechanisms for trade integration”. But he cautioned that it could take years to develop, and this is just “first step on a long road which Latin America must travel”.

Brazil and Argentina will discuss the currency plans at the meeting of the Community of Latin American and Caribbean States (CELAC) in Buenos Aires on January 24.

Brazil has the largest economy in Latin America, and Argentina has the third biggest (after Mexico).

Argentina-based Spanish economist Alfredo Serrano Manc, who directs a think tank dedicated to regional integration, the Latin American Strategic Center of Geopolitics (CELAG), told the Financial Times that “the path is to find mechanisms which substitute the dependence on the dollar”.

He added that now is the moment, given that “there are many governments that are ideologically similar”, with left-wing leaders across Latin America. 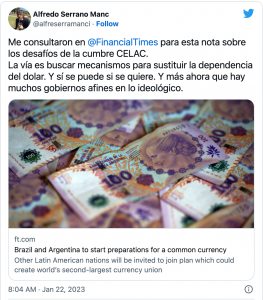 During his electoral campaign, Lula had floated the possibility of creating a regional currency for trade.

At a rally in May 2022, the Workers’ Party leader had said, “We are going to create a currency in Latin America, because we can’t keep depending on the dollar”.

Lula revealed that it would be called the Sur. He added that it would not be based on the euro model, in that countries could maintain their sovereign domestic currency.

Instead, the plan would be to use the Sur for regional trade, Lula said. 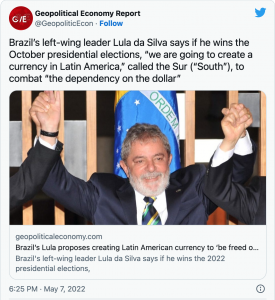 Arauz said the plan would be to revive regional institutions like the Union of South American Nations (UNASUR) and the Banco del Sur (Bank of the South), and to create a Banco Central del Sur (Central Bank of the South) to oversee the new currency.

The goal is “to harmonize the payment systems of” the countries that make up UNASUR in order “to carry out inter-bank transfers to any bank inside of the region in real time and from a cellphone”, he wrote.

Arauz was a presidential candidate who came close to winning Ecuador’s 2021 election. He is also finishing a PhD in economics.

Argentina has suffered with odious debt owed to foreign colonial powers for 200 years.

Today, Argentina is trapped in $44 billion of debt with the US-dominated International Monetary Fund (IMF).

This dollar-denominated foreign debt has led to a constant drain of foreign currency out of Argentina, fueling high levels of inflation.

As former president, Lula was himself a co-founder of the BRICS.

Both Brazil and Argentina are already part of a South American trade bloc, known as Mercosur (Mercado Común del Sur, or Common Market of the South).

Lula has for years emphasized the importance of economic and political integration of Latin America and the Caribbean.

Immediately after returning to office in January, Lula moved to revive and strengthen regional institutions like CELAC, UNASUR, and Mercosur.

Brazil’s previous far-right President Jair Bolsonaro had sought to sabotage these organizations, withdrawing or suspending the country’s membership and instead aligning the South American giant closely with the United States.

Bolsonaro came to power thanks to two US-backed political coups in Brazil, including a parliamentary putsch against Workers’ Party President Dilma Rousseff in 2016 and the politically motivated imprisonment of Lula on false charges in the lead-up to the 2018 election.

Fearing legal consequences in Brazil for his flagrant corruption and for policies that caused the mass deaths of citizens, Bolsonaro fled to Florida two days before his term ended. He has since been living in the United States as a fugitive from justice.

Un Expert: ‘Outrageous’ Western Sanctions Are ‘Suffocating’ Syria, May Be Crimes Against Humanity

Imperialism and Capitalism are ‘Bleeding the World Dry’: At UN, Nicaragua Calls for Global Rebellion