The Oaxacan Institute for Attention to Migrants, and its director Rufino Dominguez, called for a new era of respect for the rights of migrants in commemorating the International Day of the Migrant in the ’s state capitol building. Representing the newly-elected state government, Dominguez paid tribute to the contributions of the braceros, the first of Oaxaca’s migrant workers to travel to the United States from 1942 to 1964—and to the women who cared for the families they left behind.

Around the balconies of the palacio’s courtyard hung photographs showing the lives of current migrants from working as farm laborers in . Migrant rights activists, artisans, and public officials spoke about the important role migration continues to play in ’s economic, social, political, and family life. The State, located in southern , is the source of one of the largest waves of migration from to the

Dominguez, the former coordinator of the Binational Front of Indigenous Organizations, which organizes indigenous migrants in both and the , was appointed director of the IOAM by ’s new governor, Gabino Cue Monteagudo. Cue defeated the PRI, the party that has governed for the previous 80 years. In an interview, Dominguez described the different road the new government is taking to ensure social justice for Oaxacan migrants today. What follows is taken from his tribute.

We can’t tell the government, or the governments of and other states, to respect the rights of our people who are living there, if we ourselves are not respecting the rights of migrants here in . Many migrants passing through from and other places suffer systematic violations of their human rights. Sometimes the problems of migrants within are even greater than those we have in the

“Oaxacans are also migrants within our own state, like those who work in the coconut palms on the coast. About 30,000 Oaxacans migrate for work without leaving the state, and we’ve never paid attention to them. Another 300,000 live in and states in the north—like , , and . The Institute hasn’t paid attention to them in the past either.

“And we’ve never consulted the people who actually live in the about our activity there or asked for their opinions. We want a different vision, a more level or equal relationship where we’re not dictating policies because we’re the government, but asking people for their input and opinions.

“Our starting point is to understand the need for economic development because the reason for migration is the lack of work and opportunity in people’s communities of origin. If we don’t attack the roots of migration, it will continue to grow. There’s a fear of investing in our own people, but there’s no other way. We have to have economic development and respect for the human rights of migrants as “they come and go. 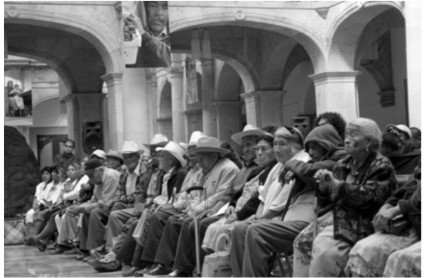 We also have to tell people about the risks of migrating. In and Tamaulipas, they’ve found hidden graves of many migrants and the surprising thing is that the big majority killed with such cruelty are Mexicans. It’s not just a risk to cross the border into the You’re risking your life migrating here in your own country. People also need to understand that the economic crisis in the hasn’t gotten any better. When you get there, your chance of finding work is worse than ever and there’s a lot of competition for jobs.

“So we have to work on implementing the right to not migrate, while protecting the ability to migrate safely, making sure that people’s dignity and human rights are respected.

“In March alone, 4,000 migrants were sent back after trying to cross into the That tells us that there’s still a huge number of people trying to cross and that the number isn’t getting any smaller. The economic pressure on people to migrate, and the violation of human rights on the border, are still part of our reality. Migrants are raped and beaten, and recruited into criminal gangs.

“Over 300 Oaxacans have disappeared and we don’t know if they’re alive or dead…. Our state is responsible for them, along with the Federal government. Yet we don’t accept responsibility for the economic development that could change it. This silence is a disgrace, at the same time we’ve become so dependent on remittances migrant send back to their families.

“The labor of migrants in the has been used throughout history. They tell us to come work and then when there’s an economic crisis, we’re blamed for it. They accuse us of robbing other people’s jobs, and our rights are not respected. These new state laws in , , , , and elsewhere are not just anti-immigrant but inhuman. Meanwhile, the current administration has hardened its policy of detaining and deporting immigrants unjustly, which accomplishes nothing. In IOAM we feel like we’re just shouting at the wall—they don’t hear us.

I don’t believe that a program of guestworkers or braceros will resolve these problems of migration. First, it perpetuates a dependence on remittances. We also know from our experience with the bracero program in the 1950s and 1960s that these programs don’t work. We have many former braceros who are still fighting to get the 10 percent of their wages that was withheld during those years. Current H2A and H2B programs give people a work visa, but the rights of workers in these programs are not respected. Often they aren’t paid legal wages, they live in terrible conditions in substandard housing, and they have no right to organize or make demands on their employers.

“With a green card, or residence visa, people migrating have some security. That doesn’t exist with a guest worker visa or crossing with a coyote. If people’s rights are violated, if they’re not paid adequately, if they can’t earn Social Security to allow them to eventually retire, then this system is worthless. It’s just producing throw-away workers whose labor gets used, but who have no benefits. So why are we talking about more programs that fail to respect human and labor rights, and which don’t guarantee housing, education, and health care?

“If we begin by talking about rights and decent wages and conditions, maybe we can see a way forward. But if it’s just “come sell your labor” with no respect for your rights, these programs are worthless. The governments of both and the must prioritize human and labor rights.

David Bacon is a writer and photojournalist based in and . Photo above is by Bacon.

David Bacon is a photojournalist, author, political activist, and union organizer who has focused on labor issues, particularly those related to immigrant labor. He has written several books and numerous articles on the subject and has held photographic exhibitions. He became interested in labor issues from an early age and he was involved in organizing efforts for the United Farm Workers, the United Electrical Workers, the International Ladies' Garment Workers' Union, the Molders' Union and others.

In Rural California, Farmworkers Fend for Themselves for Health Care

Trouble in the Tulips

At the End of this Hated War, We Need Truth

Is the Abandonment of Guest Worker COVID Protections a Taste of Things to Come?

Building a Cross-Border Culture of Solidarity

Will the New NAFTA Make the Pandemic Worse for Mexicans?