Two hundred immigrant workers and hundreds of supporters marched through downtown Berkeley on February 17, protesting their firing from Pacific Steel Castings. The company is one of the city’s biggest employers and the largest steel foundry west of the Mississippi River. Starting at City Hall, they walked for an hour past stores and homes as bystanders often applauded. Teachers and students at a Montessori school along the route even came out to urge them on.

At a rally before the march started, fired worker Jesus Prado told the assembled crowd, “I worked for Pacific Steel for seven years. We’ve organized this March for Dignity because we want to stop the way they’re stepping on us and treating us like criminals. We came here to work, not to break any laws.”

“Many of us are buying homes or have lived in our homes for years,” added another fired worker, Ana Castaño. “We have children in the schools. We pay taxes and contribute to our community. What is happening to us is not just and hurts our families. All we did was work. That shouldn’t be treated like it’s a crime.” Berkeley City Councilmember Jesse Arreguin agreed: “We’re here today to send a message to the Obama administration that the I-9 raids have to stop.” 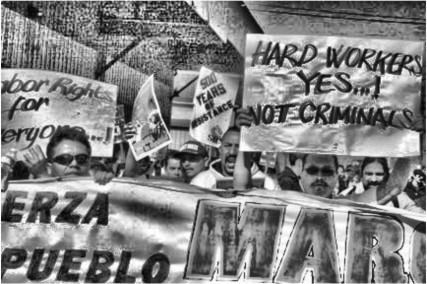 Two hundred fourteen workers were fired in December and January as a result of a so-called silent raid, in which the Immigration and Customs Enforcement (ICE) arm of the Department of Homeland Security inspected the company’s records to find workers who didn’t have legal immigration status. ICE then demanded that the company fire them. 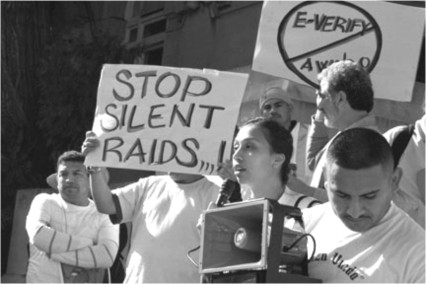 For the past year these workers have held meetings in union halls and churches, distributed food to families hungry because they could no longer work, and spoken to elected officials. The march was the culmination of months of debate in which they weighed the consequences of making their firings public and therefore their immigration status as well. “We know Berkeley is a sanctuary city,” one worker explained. “This is about the safest place we can think of to have this march. What happened to us was unjust and we feel we have to protest, if not for ourselves, then for others who face the same injustice.”

In fact, tens of thousands have been fired in recent years because of their immigration status; thousands of janitors have lost jobs in Minneapolis, San Francisco, and San Diego; 2,000 sewing machine operators were fired in Los Angeles; many more workers across the country have been caught in this wave of terminations. 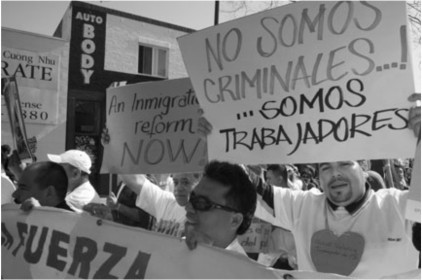 Since the Immigration Reform and Control Act of 1986, employers have been prohibited from hiring undocumented workers—and those workers have been forbidden to hold jobs. To keep track, for a quarter century all workers in the U.S. have had to declare their immigration status on I-9 forms when they got hired. Now the Obama administration has made the inspection of those forms a centerpiece of its immigration enforcement strategy. 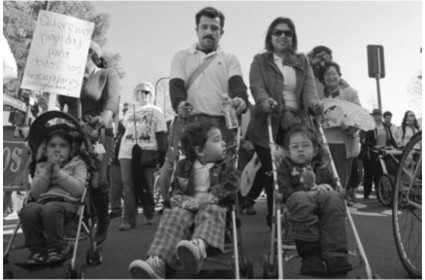 Throughout the march, chants and shouts condemned the Administration. Activists in the crowd pointed out that President Obama is attacking the communities of immigrants and people of color who were his strongest supporters in his 2008 presidential election campaign. At the time, Obama promised he would adopt a more humane approach toward immigration enforcement than his predecessor, who became notorious for factory raids and mass deportations. Candidate Obama said he’d work to reform immigration law so that immigrants could enjoy greater rights. Once in office, however, the Administration not only continued President Bush’s policy, but also vastly expanded I-9 audits and firings.

ICE began its audit of the I-9 forms of workers at Pacific Steel last February. In March, the workers and their union, Molders Union Local 164B, struck the plant for a week to turn back company demands in contract negotiations that would have had them pay more for their health coverage. According to legal charges filed later by the union, the ICE audit should have stopped at that point, since the agency’s own internal rules call for it to avoid enforcement actions during labor disputes.

The audit, however, continued. At the same time, throughout the following spring and summer, city councils in Berkeley, Oakland, and Alameda passed resolutions calling on ICE to abandon it, to allow the workers to continue working and the company to function normally. Similar resolutions and letters poured into the office of DHS Secretary (and former Arizona governor) Janet Napolitano from unions, labor councils, community and immigrant rights organizations, and local elected officials.

Nevertheless, in November ICE sent Pacific Steel a letter listing the names of the 214 individuals it insisted lacked visas, according to its database.

About half the workers live in nearby Richmond and San Pablo. Richmond Mayor Gayle McLaughlin condemned the firings and accused ICE of undermining the city’s already-devastated economy in the middle of a recession. “Their firing is a violation of their human rights,” she said at a local food drive for the workers. “When they say that these raids are targeting criminals, it’s not true. People who are just trying to make a living are being targeted big time.” 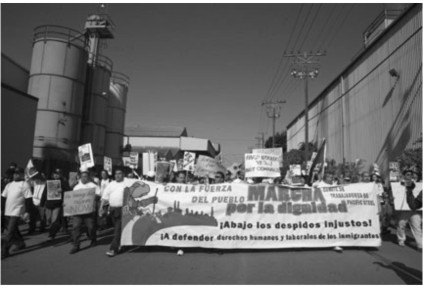 Councilperson Arreguin, one of the first elected officials to support the workers last year, added, “The company and the workers pay taxes that support local schools and services. We could lose money we desperately need in these challenging economic times. The workers’ paychecks inject hundreds of thousands of dollars into our local economy every month that support other businesses and families. All this is placed in jeopardy by the audit. It is not necessary to enforce immigration law in a way that is so destructive to workers, their families, their employer, and our entire community.”

Some other public officials, however, attacked the idea that local communities should defend the workers and said the workers were “stealing jobs,” despite the fact that many of those fired had worked over a decade in the foundry. Arreguin responded, “An immigration audit leading to the firing of these workers will not create a single job. Instead, it will force them into the underground economy where illegal wages and conditions are prevalent. It will not improve wages and conditions in the foundry. There is already a union contract in place that guarantees healthcare, pensions, and wages that can support families.”

On the day of the march, the company and union released a joint statement in which Pacific Steel declared, “These terminations were not only devastating to the workers and their families, but also to the workforce at PSC. The company is proud to have a workforce of extraordinary longevity and skill. Many PSC employees have worked here for decades, earning generous wages and benefits for their hard work and dedication to the company…. [We] implore the protestors to direct their attention to the Department of Homeland Security and federal policy makers.”

The union also criticized “the broken and unfair laws used by the government to disrupt and destroy the lives of many of our friends and colleagues.”

The rallies that began and ended the march made the human cost of the firings plain. Metzli Blanco Castaño, daughter of Ana Castaño and David Herrera, both fired Pacific Steel workers, told supporters of her concern for her own future. “I’ve lived in the Bay Area my entire life and now I might not be able to stay,” she said. Like many others, her parents have exhausted their savings and their home is now in foreclosure.

One of the justifications made by Obama administration officials for the audits is that if undocumented immigrants cannot work or find other jobs, they’ll be forced to leave the country in a process euphemistically called “self-deportation.” Yet, among the 214 workers and their families, hardly anyone plans to return to Mexico. “We came because there was no work for us in Mexico and we couldn’t survive,” said David Herrera. “That hasn’t changed. There’s nothing to return to.”

Bill Ong Hing, law professor at the University of San Francisco, says the lack of jobs in Mexico is a consequence of free trade and structural adjustment policies designed to benefit large corporations. He calls the Administration’s justification divorced from reality. “Employer sanctions [the section of immigration law that prohibits undocumented people from working] have not reduced undocumented migration at all. They’ve failed because NAFTA and globalization create great migration pressure. Trying to discourage workers from coming by arresting them for working without authorization or trying to prevent them from finding work is doomed to fail in the face of such economic pressure. To reduce it, we need to change our trade and economic policies so that they don’t produce poverty in countries like Mexico.”

Reverend Deborah Lee of the Interfaith Coalition for Immigrant Rights called this kind of enforcement a violation of the workers’ basic human rights. “These families have done nothing wrong,” she said. “They’re being punished for working, which is what people in our community are supposed to do. We will not let this happen in silence or allow these workers to be treated as though they are invisible.”

As hundreds of people filled Second Street, a block away from the foundry where they’d put in their years of labor, the fired workers were certainly not invisible any longer.

David Bacon, a former union organizer and a fellow at the Oakland Institute, is a freelance writer and photographer. He is also the author of Illegal People and The Right to Not Migrate (both by Beacon).

David Bacon is a photojournalist, author, political activist, and union organizer who has focused on labor issues, particularly those related to immigrant labor. He has written several books and numerous articles on the subject and has held photographic exhibitions. He became interested in labor issues from an early age and he was involved in organizing efforts for the United Farm Workers, the United Electrical Workers, the International Ladies' Garment Workers' Union, the Molders' Union and others.

In Rural California, Farmworkers Fend for Themselves for Health Care

Trouble in the Tulips

At the End of this Hated War, We Need Truth

Is the Abandonment of Guest Worker COVID Protections a Taste of Things to Come?

Building a Cross-Border Culture of Solidarity

Will the New NAFTA Make the Pandemic Worse for Mexicans?